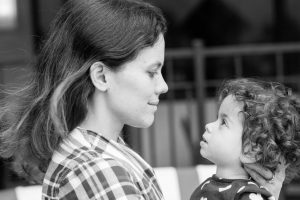 My family spent this past year and a half existing in a space between living and dying. My youngest daughter, Talia, was diagnosed with Tay Sachs shortly before her first birthday. The milestones that she hadn’t yet hit, like rolling over or sitting up, I now learned she would never reach. Her brain would be slowly overwhelmed with a buildup of lipids that were supposed to be slowed by a key enzyme that Talia was lacking. She would lose all of her remaining abilities — the power to move, to smile, to eat — until her body one day would no longer be able to function. Regardless of my parental or medical decisions, the outcome would be the same. She was a living child with a terminal diagnosis for whom death was certain, but the timing was not. We,  her family, existed in a world adjacent to grief, separated from those  joyously living in the present.

We lived the unique experience of anticipatory grieving. While Talia was alive, I tried to write about the lessons I was learning and reflect on the hidden blessings of our terrible knowledge.  I could never complete this piece because of how I feared that anything I thought I had learned would somehow be immediately invalidated once Talia actually did pass away. I kept waiting to write; only now, two months after her death, can I look back and know that the time I had to prepare for her death provided an invaluable cushion to catch my fall.

To the outside world that didn’t know of her diagnosis, Talia appeared to be a calm, content, sleepy child with a wild mane of hair. She was all of this to me as well. Yet I carried the hidden burden of knowledge that each smile could be her last and that her “sleepiness” was due to her inability to hold her eyelids fully open. The disconnect between Talia’s happy baby appearance and the weight of knowing her true condition was one of many many issues I had to learn to deal with. It was a challenge for me to reconcile the image of her appearing healthy from the truth of her condition. Those around me struggled as well.

In the immediate aftermath of the diagnosis, I grieved deeply. I grieved the impending loss of Talia, but more so I grieved the loss of the image of the family I worked so hard to create. I grieved for the loss of innocence of my two other young children. I grieved for my own loss of innocence. As I grieved, I was also staring at Talia, a calm seemingly content  child who would stay a “baby” forever, who didn’t know the world she had lost. She still wanted to be held by me, to nurse from me, to receive love from me. How could I do it I wondered? How could I pour my love into something that would leave me so soon?

For a time, I detached from Talia as though she were simply a ghost living beside me. I spent a few weeks post diagnosis staring at Talia and trying not to see the adorable baby in her. I tried to see her as nothing. I tried to separate and dedicate myself to not making any new memories with her. I wanted to keep her siblings away so that their bond wouldn’t grow stronger. I believed that any time spent loving her now would only make the loss of her harder down the road. In the end, this road only made me feel empty. In preemptively grieving Talia, I  dehumanized her and therefore I dehumanized myself. The love I feel for her and the connections that my children would make with her build us all up to be deeper and truer human beings.

After finding the strength once again to focus on building experiences with Talia and our family, I tried to live only for today without fear of tomorrow. I tried my best to block out my fears of decline and enjoy each happy smile and well-earned laugh in an isolation chamber in my mind, separated completely from the other dark corners. This strategy also didn’t work. It felt false, like I was living in a state of denial. If I ignored what I knew to be true, then the fall after she was gone would be as hard as if I had never known anything was wrong.

The method that ended up finally working for my family and me was to look reality hard in the face, accept it and then move forward with the present and the future fully in focus. I loved Talia each and every moment of her life, and I made sure to capture every laugh and smile I could on camera knowing it may be her last. I allowed myself days where we were purely happy and her disease was far from my mind, and also days where the pain was so much that I took breaks from caring for her to maintain my own well being.

I forced those around me to take a similar approach. I didn’t let anyone around me get away with magical thinking, miracle wishing or rewriting of the past. I reached out to and accepted the support of a host of wonderful people from family to neighbors and great friends, while all the while insisting that they not sugar-coat our situation or indulge in false hope. I also made a point of refusing to be deified, knowing that the title of “hero mom” wasn’t one I wished to embody.

A large part of the reason I managed those around me in this hyper-realistic manner is because I was consciously training us all for the inevitable fact that this period of my life as the parent of a dying child was going to end at some point. I knew that I needed to protect myself and my family from the shift from caregivers to grievers and that maintaining normalcy in the face of the abnormal was the best way to do so.

Protecting my two healthy kids was also of paramount importance to me and I’m grateful to have had the time of anticipatory grief to help them understand death proactively rather than having to teach them that painful lesson in the immediate aftermath of loss. There are some parts of Talia’s illness that they understood with minimal questions, like the fact that she wouldn’t develop and would stay a “baby” forever. Explaining death was more abstract and only truly made sense to them after she was gone. I likened it to discussing pregnancy to a young child. Regardless of the evidence of the mother’s growing belly, it’s only after the baby is born that the child understands the true impact of the change. So too, even as my children saw Talia become stiller and more silent each month and we had discussions about how her body was shutting down, it wasn’t until she  had died and was no longer in our home that they really understood her absence to be a permanent one. The time we spent talking with them helped ease the transition immensely, as did the fact that we did everything in our power to continue, hiking, playing board games, and laughing rather than focusing on dying. The more attention poured into them while we were “whole”, the more, I believe, we will survive as a family unit now that a part of us is missing.

I also used the time I had with Talia to run through post-death scenarios in my head. I had the time to prepare for what life would look life after Talia is gone. How I would answer the seemingly easy question of how many children do I have? How would we fill out family tree assignments at school? Time spent thinking about these questions didn’t stop the pain, but with practice these questions became normalized in my mind and therefore easier to answer.

I played a delicate balancing act of living for today, but not forgetting about tomorrow. If you knew your loved one would die in a year, you would want to live each day like it’s your last. I find that requires an emotional and physical energy that is impossible to maintain. I prefer to live each day as I did the day before, live as much in the moment as possible while also not forgetting that this moment will pass. The good and the bad times alike exist for only fleeting moments that morph into something new. The hell of sleep training a baby, for example, is a blip in the timeline of life, yet an excruciatingly long blip to live through. The time spent playing cars on the floor with your son at rapt attention is a fleeting moment all too soon to be replaced by the rigors of schoolwork or arguments about video games.

I learned to live simultaneous truths. My child is going to die/My child isn’t dead yet. My children are all forming a wonderful bond/That bond may make the pain of loss harder to overcome.  It’s was very important for me to not allow myself to forget the reality of Talia’s situation but also not let myself get dragged down by it. I feel  deep sadness but try not to  allow that sadness to remove me from being present.  My emotions rise, fall and transform. As they come up I acknowledge them, feel them and then let them flow through me knowing that something new will take its place. I can’t control what comes downstream, I can only try to manage the flow.