As a rare dad and one who went to the hospital often with my son Lucas, I was always amazed  and worn down by how often the questions and hospital forms required me to repeat the same information. In many cases, this was information I knew was already in the system. Sometimes different doctors in the same hospital could not access or re-use the information I had provided to their colleague and I had to re-do the form or re-tell the information. This may sound like a minor annoyance but I was usually in the hospital during moments of crisis and not in my best mind. Suddenly trying to recall the dates of surgeries or the alternate names of drugs was either an irritation or a monumental challenge. Most of these things were deeply ingrained in my daily routine and I could rattle them off the top of my head – until ER fog crept in which always seemed to happen when asked, “ What year was that surgery?” It was then that I would dig through my paper files or search my phone. One time, I actually scrolled years back in my Facebook feed because I knew I had posted a photo of Lucas in recovery and it would have the date I needed. If you haven’t already experienced this, you probably will.

I learned the hard way the value of having one-page documents ready to pass out during each doctor or hospital visit. Now I want to offer you the chance to avoid that particular part of being a parent of a seriously ill child.   Here are my tips for preparing some simple documents that help you avoid having to play ”What’s the deal with your kid?” while at the hospital.

You need to know the generic names too. So often, a doctor would say, “So he’s on sulfamethoxazole-trimethoprim” and I’d say no he’s not. Then a couple minutes later, I’d realize it was the drug I referred to as “Bactrim” and we would have to backtrack. Knowing all the drug names helps you and the doctor talk the same language avoiding confusion and saving time.  For liquid meds, be sure to also know the concentration of the drug (how many ml per mg?). I never knew that off the top of my head.

It’s also handy to list meds your child previously needed but no longer uses. Often doctors have a list of their own and are looking to update it. This can avoid confusion if they ask about something out of date and you’re wondering why.

I always thought these were such big deal events in my son’s life that I would never forget one of them. But I did, or at least the precise date of the surgery. Have a list of all the surgeries, the  date and the reason for the surgery. Bonus points for including the surgeon’s name, recovery times or recovery challenges (for example, if anesthesia was a problem).

This is a big one. They might never ask for these. Or, it might not come up until the end of a hospital stay. This is where you are the expert; where you know your kid. It can be especially helpful at that moment when you keep asking if you can go home yet and they say “We’d need to see him staying at his baseline for 24 hours.”, Does your child have a non-typical baseline temperature? Heartbeat? Oxygen levels? For you to simply say so at the time probably won’t do much good. It’s anecdotal. It’s hearsay. But if you have a sheet with your child’s temperature recorded with time and date once a month for 12 months, that could be more convincing than saying his baseline temperature is really one degree above “normal” all the time. It might just get you out of the hospital a bit sooner!

One pager on your rare disease

If your child has a rare disease, they will see many different doctors. It’s not likely they will all be familiar with this disease. They may be hearing of it for the first time just as they read your child’s chart. I always  got a quick clue that this was the case when they mispronounced “Menkes Disease” or put a verbal question mark at the end of the name. I used to take this as an opportunity to do my three minute oral history of Menkes Syndrome. And that mostly worked, but it often felt like a chore, and in my “ER fog”  I sometimes forgot key elements. After I started bringing a one-page summary of the disease with me, I could do a much shorter verbal explanation and hand over the sheet for additional details. It is best to try to keep this document to one side and not make it too dense – think bullets or highlights! Ideally, the doctor will be reading this right then and there, not later for homework so it shouldn’t be a long read. Be sure this information is credited to a reliable source like a medical journal. At the bottom you can offer links to more information – one of these can be the research of advocacy foundations for your disease. 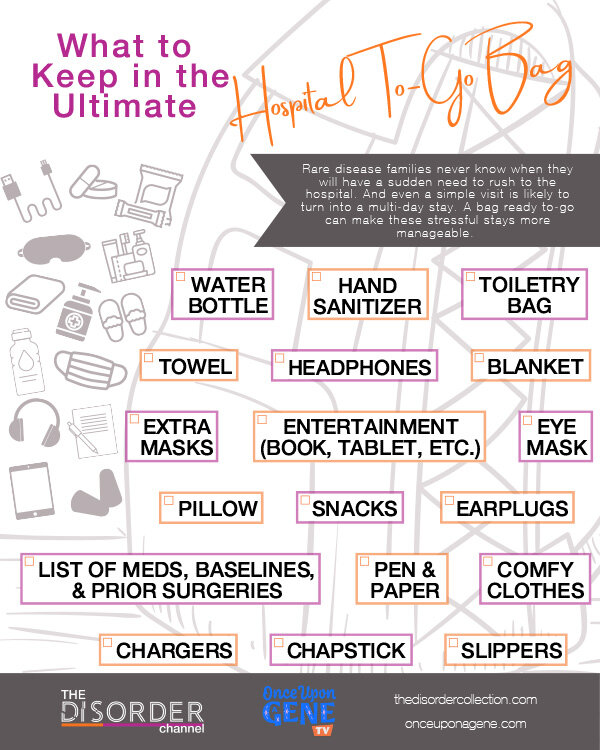 A Go-Bag checklist (maybe packed too!)

There’s no such thing as a quick trip to the ER. I would be on the phone with a doctor from our team and hear the words “You need to come in immediately.” Immediately?!  My brain would scramble –  the hospital is 30 minutes away and every ER trip with Lucas ended with him being admitted for 3-7 days. I would need to pack for him and me for 7 days. Sure, the hospital will have his meds, diapers, tubing and that gown thing, but there were still things he’d need from home. These are often things you don’t always think about at first – comfort items, or in our case it was my DIY hack to adapt one of Lucas’ tubes. And then of course, there’s the stuff you yourself need for your sudden sleep-on-a-chair adventure.

On one of those horrible hospital chair/bed nights, I discovered a fantastic podcast by Effie Parks called “Once Upon a Gene” and settled in to listen to her third episode, Hospital Hair Don’t Care.  In this episode, she lays out instructions on how to make a hospital stay more tolerable. She essentially gives you a Go-Bag checklist.  A few weeks after that hospital stay, I met Effie by phone. I urged her to make a printable version of her Go-Bag checklist and together we made it happen.  Here’s the result

Print it, modify it, create your own and keep it handy. Believe me it will spare you some hassle!

For more tips on navigating the hospital visit our video library and download this guide. 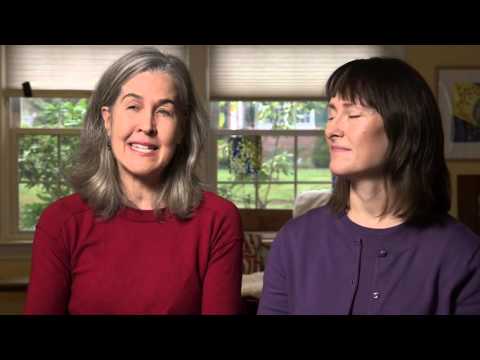 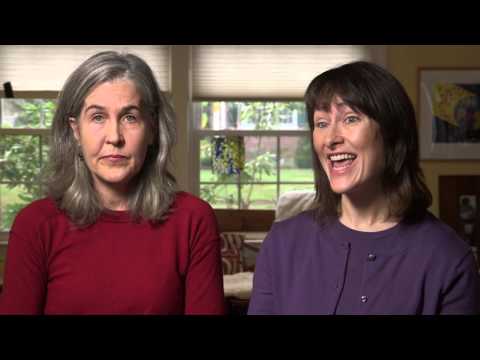