I spend a lot of time raising awareness for Menkes Disease and other Rare Diseases, striving for the cure. So, it might be shocking to hear when the next treatment for Menkes is available (and it might be the cure) I’m not sure I want it.

Let me back up a bit before I explain why. Menkes Disease is terrible, the boys with it don’t live long and are severely limited in their abilities unless they get treatment in the first 10 days of life. My son Lucas, got that treatment but not until he was one year old. We can’t be sure if it helped at all or even if he was in a placebo group.

As bad as a diagnosis of Menkes Disease is, in a few ways we were lucky. Lucky that there was already a clinical trial, lucky that we got in to it, lucky there was already The Menkes Foundation, lucky to find a robust online support group already active. You know that the norms of your world have been re-defined when you count these things as good luck. But I’ve met enough Rare and undiagnosed families to know that getting those items I just listed can be a huge struggle. It’s a part of the Rare struggle we got to skip over.

You learn quickly when facing a Rare Disease that it’s pointless to compare yourself to others. Yet we’re human and sometimes we still do it. I think of the similar and yet so different Rare Disease situation my good friend is facing. Bo Bigelow is my partner and co-founder of Disorder: The Rare Disease Film Festival. His daughter’s condition, UPS7 mutation is so newly discovered that they had none of those systems in place. They are building their foundation from zero, they are finding the other patients and fundraising to try to get some research that might lead to a clinical trial. Again, pointless to compare, but when I do, I think of USP7 as a “young” Rare Disease (it still hasn’t been named) and Menkes Disease as a more mature one (it was discovered in 1962).

So, we were fortunate to get our son into a clinical trial with a treatment that has been shown to make a huge improvement in outcomes. Lucas was it in for three years, after that point harmful side effects are thought to outweigh any benefits. But science has progressed since then. We’ve heard a new clinical trial might not be far off and Lucas might be a candidate. This too can be thought of as more good fortune since often older patients are excluded from these studies. But as we imagine what the next clinical trial might offer we’re not sure we want it for our son.

Imagine is the key word here since the pace of science with advances like CRISPr Cas9 gene editing’s promise of repairing, replacing and patching single gene mutations sounds more like science fiction than any previous version of medicine. Menkes Disease is a single gene syndrome. The ATP7A is mutated. Suppose the next clinical trial sets out to replace my son’s faulty gene with a working copy. And suppose it works as intended. He starts to produce the copper-transport protein that he has lacked all his life. Would he be cured?

I think it would be a technical cure. And certainly, a worthwhile endeavor for advancing the science. But would it advance my son’s health? Or more to the point his quality of life? 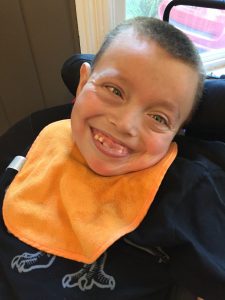 For the past nine years Lucas’ inability to metabolize copper has greatly impaired the development of his brain, muscles and hair. It’s as if his development reached that of a five-month-old and mostly plateaued after that. If he were cured tomorrow would that ensure the plateau didn’t slip into decline? (In the current prognosis a decline is inevitable.) If so he’d stay the same but live longer. We can argue about whether living longer is better and if so how much longer? But avoiding a decline can sound tempting.

Or suppose the cure, the repaired gene, moves him off his developmental plateau and he starts making gains. Gains on a similar pace to a healthy child? But with his previous nine-year lag, what form would that development take? At age eleven he gains the skills of a three-year-old? At age 14 a six-year-old? Are these good outcomes? I honestly can’t decide. We love Lucas as he is now, full of laughs and smiles despite not being able to talk or control his body. We’d of course love him whatever changes may come, but should we choose to create those changes in him?

Another aspect to consider. We (his mom and I) suspect Lucas feels less pain than those in typical health. If true this has probably aided his tolerance of the many strains on his little body. We’re not doctors and so far, there’s nothing in the literature to support our hunch but I’ll share it anyway. We wonder if the same lack of brain development has resulted in less developed nerve endings and therefore he’s less receptive to pain inputs. If so that’s a real silver lining on the storm cloud of Menkes Disease. Again, this is all our non-science-educated anecdotal guess work here. But we’re imagining things like cures, right? Cures that sound like Sci-fi movie plots.

So, imagine with me a bit further that the cure comes for my son and his myelination improves, the nerve endings grow to more normal functioning. Does he begin to feel more pain? On paper this is improved function. A researcher could celebrate success. But does it improve things for my boy?

Now I think you can see why we might refuse a cure when if and when it comes.

Then again just because we may not want a cure for our son, that doesn’t change how much we want a cure for Menkes Disease –for those just diagnosed and for future generations. Those populations can still see their boys develop on a more typical path with less pain, disability and longer life.

Daniel DeFabio is the co-founder of Disorder: the Rare Disease Film Festival. Films from the festival including his own film about 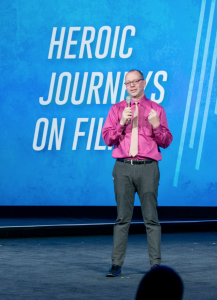 his son will screen in Boston and Sioux Falls this September. He has written for The Mighty, Geek Magazine, Video Maker Magazine,  BoingBoing.net and FanboyPlanet.com.