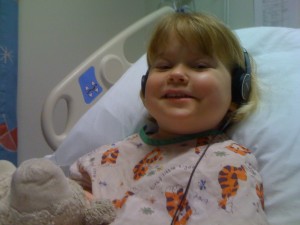 Sophia was a typical 3 year old, riding her bike, playing princess, and attending preschool. She started to feel unwell, and eventually developed a fever that would not go away. I brought her to her pediatrician, who upon taking her vitals sent us to the emergency room. Within a few hours, the medical team told us they suspected leukemia, and we were admitted to the hospital.

Sophia was diagnosed with ALL, the supposed “good type” of leukemia. We were told there was a 95% cure rate, and were very hopeful. Sophia went through the first phase of her protocol with no issues, with the exception of losing her hair.

While we were on a two-week break from treatment, Sophia developed mouth sores and began to vomit blood. Something was not right, and I insisted she be admitted. On Sunday, June 24th at 10:00 pm Sophia went into full cardiac arrest and passed away at 7:00 am on June 25th .

Sophia’s death was labeled a “remission death” as she had no detectable cancer in her blood at the time. Having no answers has been very difficult for our family. I have run those last few days and weeks over and over in my mind, wondering what went wrong. I could not help but wonder if I, as Sophia’s mom, missed something. Did I somehow not keep her safe? Every member of our family has had guilt over Sophia’s death, including her two older siblings who were 9 and 6 at the time.

Although I never blamed the doctors, I wondered if they had missed something, too.

It has been almost 4 years since Sophia passed away and these thoughts still linger.

I have recently begun to work for the non-profit Courageous Parents Network. Through my employment, I have had the opportunity to participate in outreach to providers. This has proven to be remarkably therapeutic in unexpected ways. The first providers with whom we met were the same two physicians who cared for Sophia on her last admission. I had some hesitation, but felt Courageous Parents Network programming, specifically parent videos, could be a real asset to their work, and moved forward with our meeting. The meeting consisted of the two physicians, my colleague, 40 residents and myself. As we were going through the presentation, a discussion began about how our children and their journey affected the providers. At this point, the intensivist who cared for Sophia stopped the conversation and explained to the room that he has been deeply affected by what happened to Sophia, admitting that he still does not understand why they were not able to save her. He was emotional, vulnerable, and even teary as he spoke. I felt exposed and caught off guard. But as the conversation went on, it began to feel like we were the only two people in the room. I left shaken from the unexpected conversation, yet calm.

I now realize that was the day my real healing began.

This past week, I went back to that same institution for another presentation, this time to a group of first year medical students. The oncologist who cared for Sophia was at this presentation, as well. While we were discussing the relationship between providers and parents, one medical student raised his hand with a question, “How can you stand here today and work so closely with the providers who could not save your daughter?”

I froze for a moment, looking out into the room of young students, with Sophia’s oncologist sitting in the front row. I began to ramble about the importance of the work and how time has passed, and in that moment, I realized I no longer blamed these two physicians for my daughter’s death. I understood they had tried their best.

I went back to that medical student and explained how through my work in the last 3 months I have seen how they, too, were affected by Sophia’s passing and struggle with the “why?” as much as I do. It was important to me that this student understand and remember how open and honest conversation between providers and parents can help parents begin to heal. I think it can also help providers begin to heal. I emphasized that parents want to know their child’s illness or death, and what their entire family went through, has not been forgotten.

I know Sophia is one child out of many these physicians work with, and they need to practice some self-care to be able to continue to work in the medical field. But becoming more humanistic and admitting they, too, struggle with the loss has opened a door for me to begin to let go and to try to make a difference for other families in the future.