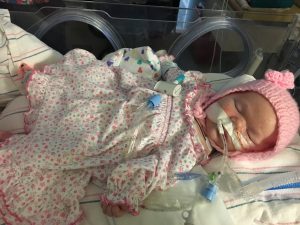 Our newborn daughter Miriam was in the hospital in the NICU for a month, while our three boys were at  home. Such a long hospital stay would be hard for anyone, but this wasn’t a temporary stay. Miriam wasn’t going to come back home. Every day we watched her monitors as the numbers were stable at first, then got lower, then got very low and we knew we were close to the end.

Miriam was taken to the hospital by ambulance from the pediatrician’s office where she went as a “healthy” baby and within days turned to a baby with a terminal disease and then to dying. When we went to the pediatrician she was wearing an adorable outfit, a pink snow suit that I loved so much on her and a beautiful pink hat that her grandmother knitted for her lovingly, along with several other beautiful hats.

I didn’t know what to do in the hospital with her car seat and the clothes that she came in. I couldn’t look at them at all. Nurses put them on a shelf in her room and covered them with a curtain, and whenever a part of them became visible I begged them to pull the curtain so I didn’t have to see them. I couldn’t touch them myself because the thought that these clothes that I had lovingly put on her one morning would never ever be needed or worn again was too much to bear. I eventually told the nurses that they could take the car seat and clothes and do whatever they wanted with them – we would not be able to take them back.

In the meantime, Miriam needed other clothes to wear in the hospital, and we were asked to bring some; but again we couldn’t. We couldn’t bring ourselves to touch and pack her clothes at home knowing we were taking them for her to die in. Thankfully the hospital provided some very beautiful clothes for her to wear.

We alternated in the hospital. I was there all day and my husband came after work and stayed till late night. I preferred having visitors and my husband had visitors also, but he often preferred to be by himself. He sang songs to Miriam late into the night.

Our boys went to school, but I often got calls from school that they were upset or crying and didn’t stay in classes. Thankfully, school gave our kids as much support as they could and other parents texted and emailed me pictures of my kids whenever they saw them smiling to let me know they’re ok. At home, the boys were distracted and so were we and we didn’t keep up with their school work or anything else.

We talked to the kids honestly and told them what was going on. At first, we told them that Miriam was very very sick, that she was so sick that she might never ever get better and might die. The kids didn’t believe it at first –  their hearts were broken in a real, not childish way.

They prayed for her, especially our oldest son who was almost 12 at the time. Later, when we knew that there was no more hope of any improvement,  we had to tell the boys that Miriam was going to stay in the hospital until she died. We asked our rabbi for guidance as it had been so helpful for our boys to pray for their sister, and we didn’t want to take that away from them, yet we didn’t want them to have hopes that would not come to be. Thankfully, our rabbi wisely advised to tell them that God had already made his decision for Miriam, but that we could continue praying for strength, courage, and peace for our family, and for peaceful last days for her.

We were very blessed that we didn’t have to take care of any meals during that time; our community took care of it and took turns cooking and bringing dinners to us every day at home and most lunches and dinners to the hospital as well.

Nurses were very kind to us. I especially remember one nurse who told me each day that she wasn’t going to have lunch till she saw that I had a lunch. They could see we were suffering and really cared. I only remember one comment from a nurse that I thought was insensitive: she said, “Miriam is sleeping so nicely.” Of course, Miriam wasn’t sleeping, she was unconscious and unaware; and this comment, though not intended that way, felt cruel. I remember that I turned to her and said pretty harshly, “Miriam is unconscious, she isn’t sleeping.”

Waiting for death is hard, and waiting for a death of a precious and deeply loved baby is unbearable. We know that Miriam touched many lives even in the short time that she lived. The funeral home that took care of her refused to take money from us for her funeral. They said they don’t charge in special circumstances like this one and they cried too. They also said that they put her pink hat in her coffin. The other hats that her grandmother made we donated to the hospital for other babies.

We are grateful that Miriam didn’t suffer too long. We are grateful that our family was strong enough to survive this loss and that we were able to and continue to be able to support each other. We all changed, we learned to empathize with the loss and difficulties of others in a way that we never could have before, and we’re grateful for that too.

People ask us sometimes if we still think about this time or if we have already moved on or why didn’t we. We never know what to say. We miss Miriam, we miss our hopes and dreams, and we see her in our kids’ faces and wonder what she would be like and what our family would be like with her in it. But we’re also deeply aware of the many incredible blessings that we do have and we try to live our best life every day. And, of course, it is always so good to not be in the hospital, but be all together, at home.