CPN does not typically promote products for sale by families. But Carla and her husband Mark have created a resource that is unique and something we wished we’d had as we helped our children die.  They have also donated it to the CPN families for precisely this purpose. Thank you so very much Carla and Mark, parents of Mackenzie and Xavier for sharing your book and for this blog about how Xavier inspired it. 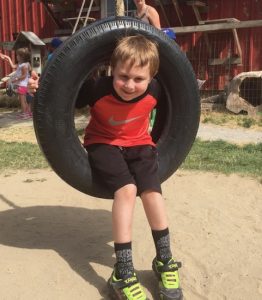 There once was a boy whose cobalt eyes sparkled like the sea in the setting sun. They would light up every time he looked at me. They were big, bright and ever so blue. They were Xavier’s eyes. They were my son’s eyes.

There once was a time when my eyes lit up with the light of this boy’s life. They too sparkled a magnificent blue. Whenever I was with him, my eyes told a story of extraordinary love.

Then one day his blue eyes turned grey. The soft beautiful backlight that made his eyes so full of life had faded. The light of his life went out. When I looked into his eyes, they were weary and empty. Although he still opened them and lovingly looked into mine, I could tell there was nothing left. No excitement, no smiles, no joy left in those big beautiful blue eyes.

After his eyes closed never to open again, my eyes too went grey. My tears washed away all the amazing colours painted in our life together. There was no excitement, no smiles and no joy left in my blue eyes.

On May 13, 2017, just weeks shy of his 8th birthday, my son’s lifelong battle with brain cancer came to an end.

I had laid beside my son’s dying body, my hand gently pressed on his warm bare chest, feeling the flutters of a heartbeat he still had left. I held my breath as I listened for his next faint shallow breaths. I wanted to help him.  I had never felt as helpless as I did in those last painfully precious moments with my little boy. Throughout his illness, I played an integral role in keeping him alive, but when it came to helping him die, I was at a loss.

When he was only eight months old, Xavier was diagnosed with anaplastic ependymoma, an aggressive, cancerous brain tumour that wrapped around his brainstem. Xavier survived a 12-hour brain surgery, followed by chemotherapy and 33 radiation treatments all before the age of one. Following months in hospital, we went home to live the best life we could, knowing our son’s tumour was incurable.

Xavier was exceptionally insightful and often described as an old soul. He was the shy, quiet type, but with a natural ability to make you laugh with his unique sense of humour and animated facial expressions. He preferred reading Captain Underpants to playing sports and had an eclectic taste in music from Katy Perry to Led Zeppelin. He and his dad often rocked out together on their electric guitars. His hugs were the best and he never turned down an opportunity to snuggle.

Xavier was always in and out of hospital, with multiple surgeries and treatments to prolong his life – each resulting in additional side effects, including nearly dying from meningitis. We always tried to live a relatively normal life, but things took a turn for the worse in late 2016. Due to the location of the growing tumour, Xavier lost his mobility and the ability to talk and eat. Breathing had also become increasingly difficult for him along with his excessive weight gain from steroids.

Our palliative care team assured us he was not in any pain. Physically he was comfortable. However, I imagined the fear of him being in that darkness unable to communicate – the mental frustration of being between two places. As his mom, I wanted to hold him in his delicate state and carry him into what was next.

I struggled to find the right words to bring him peace in those final days. Aside from repeatedly professing my love to him and my pride in having him as my son, I felt there had to be a better way to ease his fears of leaving this world.

So I began searching for books— something that could help guide us through these surreal moments, to help me say what I couldn’t through my pain. I found nothing. I eventually used a beautiful story by Nancy Tillman, Wherever You Are: My Love Will Find You, to read to him as a way to “do” something during a time when I felt so helpless. It was the very last story I ever got to read to my son.

After his death, I was determined to write a book to fill this gap and meet this unfortunate need in literature. As a professional writer, I had always aspired to write a book, but I had never imagined I would author a book for children facing death. I began researching near-death experiences of children, of what they had seen or felt at the time of clinical death. From the Bible to the personal accounts of doctors treating dying children, these powerful descriptions brought me peace and illuminated the essence of my story. I also wanted to incorporate guided imagery, a type of meditation we often used with Xavier and his twin sister Mackenzie to work through difficult emotions and relax during stressful times.

The process involved collaborating with social workers and other bereaved parents to ensure that the fears and thought processes children may have were properly addressed. It also involved incorporating our own lived experience.

The final product, the picture book My Love Will Follow You There, talks about death in real but comforting terms. It gently guides a child through that space between death and the place we go next. 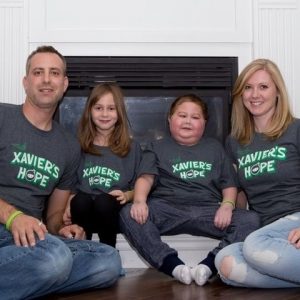 Creating My Love Will Follow You There truly became a family effort. Myself, my husband, Mark, and our daughter, Mackenzie, all turned to art as a way to cope with Xavier’s death and we channeled our brokenness into several creative collaborations. I wrote the words; my husband did the stunning illustrations featuring our daughter. The book, in memory of Xavier, has a little bit of each of us between each page. Developing this valuable resource for children and their families provided purpose to our pain. It has become part of our grief journey.

We released the book on May 13, 2019 – on the second anniversary of Xavier’s death. It has been incredibly healing to be able to create something that could ease even a little bit of fear for another child and for another family who has to say goodbye. We recognize that every situation is unique and every family is different; but we hope that this book is accessible to each of them.

When the time came to say goodbye to my son, I lovingly whispered in his ear, “Be free my beautiful boy.” In my absolute brokenness, I gave my son the permission he was seeking to die. With this book, we look to help give some of this peace to other parents who must lovingly carry their child to the place they go next.

A digital copy is available now at www.carlagarrett.ca/mylovewillfollowyouthere