We found out the devastating news on July 17, 2013. A day we won’t ever forget. Barely able to breathe, my wife and I were crying in each other’s arms, standing in the parking lot outside of the genetics office. Eliza sitting in our van, laughing and watching Dora the Explorer, was completely unaware of the news we just received.   Our daughter was dying – regressing and dying of Sanfilippo Syndrome Type A. No treatment existed – no cure. Based on charts of the disease, Eliza had likely already reached the peak of her cognitive abilities. She was only 3 1/2 years old. In just two years, she’d likely regress to an infantile cognitive level, never to return. She would never potty train or learn to read or write; never really get to know her healthy big brother or grow up to have girlfriends, or a boyfriend. I’d never walk her down the aisle. She’d never have children of her own. The tears have not stopped since that day, now 5 years ago.

Because of an incorrect gene, toxic storage was building up in her brain and was already beginning to impact her abilities, causing dementia. By age 6 she’d likely stop speaking. From there, it would get much worse. She would lose the ability to eat, and walk. She’d experience seizures. We would have to make decisions about feeding tubes and wheelchairs then preparations for her departure from this earth, likely in her teens. This was her future and it was a certainty. There was no debating what would happen. Sanfilippo Syndrome wasn’t “coming”. It was already here.

All this knowledge of what was coming set the tone for our risk aversion related to trying ANY experimental drug in a clinical trial, should we get so lucky to even have that chance. Our risk aversion was zero, with one caveat. The caveat was that there needed to be sound pre-clinical studies showing safety and promising efficacy. With that, we were ready to give anything that might slow or alter her devastating future a try. But what about a serious adverse effect? What about a sudden death? We knew potentially anything could happen, but to us, a chance would be the best option for her.

An ethicist asked about “if potentially very bad things could happen”, would this change our decision to go forward? Completely hypothetically and not related to any specific clinical trial, she challenged us to think about these questions:

In all cases, our answer was yes. We thought about how we would feel, knowing that our brain functioning would be, in essence, completely taken away in just 3 years? We knew we would want the chance and we knew we wanted Eliza to have it too. 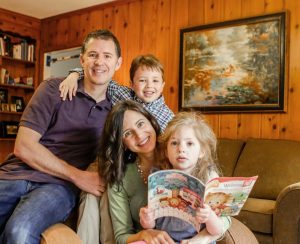 We put our conviction to the test when Eliza was 6 ½. She was enrolled in a clinical trial and was the first child ever treated with intravenous Gene Therapy for Sanfilippo Syndrome. For us, it helped that there was sound safety data in the pre-clinical work and it was a relatively simple procedure. She would have a one-time injection in her hand of a corrected gene, carried by a virus, to hopefully reach her brain and body. We were beyond thrilled that she was chosen. She had been regressing for a while (just as the charts showed) and was barely hanging onto limited speech. We knew the trial was a dose escalation trial, and Eliza would be starting at the low dose, but there was no waiting. Based on pre-clinical work and obviously, from a safety perspective, low dose was likely safer. From an efficacy perspective, the higher doses likely worked better on children regressing from the disease, like Eliza. But for us there was no decision to debate. There was no waiting, not with this disease, not at her age and not with the today’s science.

Additionally, the reality of clinical trials is, if we were to try to wait for a higher dose trial, Eliza could very well be passed over.  There is no negotiating for positions or spots in ethically run clinical trials. We were just lucky to have the chance. Waiting was never on our radar. Like all untreated children with Sanfilippo Syndrome, she needed medicine to help her, and she needed it now.

We have much HOPE for the gene therapy, which Eliza received more than 2 years ago. We have hope that it is in some way slowing the rapid progression. While she no longer speaks, there are things she does which we find remarkable. She can eat her food with a fork at dinner. She can still run and loves to jump in the waves at the beach. We are so thankful and cherish every moment, and every smile. Of course, we wish it were like “waving a magic wand”, and our child would be healed and be able to live a typical life. But that isn’t reality. Did we have any expectations prior? We didn’t. We didn’t because we could only know what the results showed in the pre-clinical mouse studies, and not in humans. We had hopes though, and certainly had dreams of the “miracle” outcome. I remember waking up in the middle of night, having dreams of Eliza talking again and carrying on typical conversations with us…but I quickly woke up. We knew where Eliza was in the disease when she was treated, and the regression that had already occurred. Our hopes had changed over the years too. What we imagined a treatment might be able to do if administered to Eliza at age 4, when she was still speaking, conversing in context, and singing songs, was very different than our hopes at age 6 ½ after this regression. That’s just how quickly things can change.

We have lived through devastating loss in many aspects of Eliza’s life, but have not seen the worst, and just maybe because of the gene therapy we never will. The strength of parents who have lived this journey and have lost a child with Sanfilippo is remarkable and is something I can’t truly imagine. I hope to able to be as strong, should that day come. Regardless, we choose to remain positive and hopeful. I suppose with Eliza and the gene therapy she received, we are in uncharted territory. Her future, uncertain, and in the world of Sanfilippo, that’s a good thing that many parents would give anything for…to have that hope and uncertainty.

Shortly after Eliza was diagnosed in 2013, my wife and I founded Cure Sanfilippo Foundation. We wanted to carry on the work of pioneering families and Foundations that came before us for the previous 20 years. Thanks to them, the research had progressed to that point of clinical trials. In just 5 years now, our Foundation, made up of more than 50 families of children with Sanfilippo Syndrome, has raised more than $6 Million dollars and generated assets of $15 Million to advocate for and fund research. We are helping move research forward faster and faster every year. The ultimate goal is a day with newborn screening and a proven treatment or “functional cure”. To think of being able to stop the toxic storage “build up” in the brain so early in life, before it really gets going is an awesome goal. How amazing will that day be when a newborn child can go on to live a typical life? How amazing will it be for those parents?

The only way to achieve that goal is through more experimental clinical trials on children today, to not only give them a chance at life and less suffering, but to find out what works and at what, unfortunately, does not. And to find this out by treating with various therapies, various doses, ages, and stages. This passion is my “getaway” from the reality of what is happening with my daughter. Instead of crying as often these days, I dive into the mission. I will love Eliza and fight for her every second of her life, no matter. And in her life, and if it comes to that, in her death, I will continue to take action and have HOPE always. Her heart guides me. 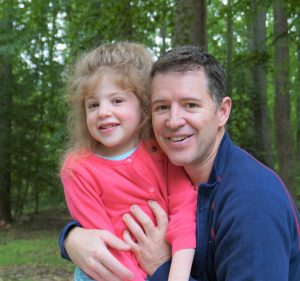 Glenn O’Neill is the father of Eliza O’Neill, who was diagnosed in 2013 with Sanfilippo Syndrome. He is the co-founder and President of the 501c3 non-profit Cure Sanfilippo Foundation, dedicated to finding a proven treatment or cure for all Sanfilippo Syndrome children. Glenn has spoken in various forums including the National MPS Society conference, NORD (National Organization of Rare Disorders), Rare Genomics Institute, PRIMR Advancing Ethical Research conference, Sanofi Genzyme Torch Awards, Molina Healthcare Community Champions Awards, GoFundMe, and others. In recognition of his work both at the Foundation and in the area of Rare Disease awareness, Glenn, along with his wife Cara, were awarded the Portraits of Courage Honor by NORD in 2015. Glenn, his wife Cara, son Beckham, and daughter Eliza live in Columbia, South Carolina. You can learn more about Cure Sanfilippo Foundation at www.CureSFF.org and follow the Foundation progress at www.facebook.com/CureSanfilippoFoundation.