CPN is proud to share this intimate piece from mom Meredith Mathews. With her permission, we have added links to CPN resources relevant to what she and her husband were looking for or thinking about as they anticipated and navigated their daughter’s end of life.

A Journey of Care 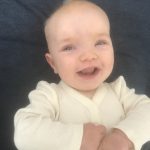 When our daughter, Hannah, was given a terminal diagnosis at 6 months of age, life as we knew it shattered.  Her condition came with a two-year life expectancy, and over that time she would slowly lose the ability to move, eat and interact with the world.  My husband and I requested a meeting with the palliative care team to understand what our options were.  What does choosing quality over quantity of life look like for a child?  I needed to know the details, the stories, anything to understand how to ensure our child’s death was painless.  For her, but also for us.  We learned that there are no exact answers or guidebooks.

We heard the advice: “Just take it day by day, be present.”

Advice that was lost on me in those first few weeks.  It was hard.  Over the next 15 months we gave Hannah all the love we could, while reconciling with our new reality , and bracing ourselves for a final goodbye.

My husband and I started therapy a few months after her diagnosis.  Two issues kept coming up. One was my fear of life after she died — the searing pain that would surely destroy me, the gaping hole left in the routine of caring for someone and, the all-consuming silence.  The second was how we would be able to make the decision to help her die.  How can anyone make that call? Would we regret our choice in hindsight, thinking it too soon, or would we intervene too much, extending her life but also her suffering?

Hannah was a calm and happy baby, who loved bath time, bouncing, music and stroller walks.  As she approached her first birthday, she moved and reacted less. We were not getting much feedback from her anymore, and there was uncertainty around how much of her day she was truly experiencing. My rendition of Feliz Navidad no longer elicited a smile, but we sensed she wasn’t in pain.  Slide on a winter hat and she would scrunch up her face and whimper.  Touch her skin with cold hands and she would yelp out.  These moments were so reassuring to us as they were confirmation that she could feel and would express discomfort.   Eventually a feeding tube was placed, and over the next few months she continued to slip away.  Once the seizures started, her already weakened systems began to fail.  We were admitted to the hospital for aspiration pneumonia, and the palliative care team gave us two choices; help Hannah return to baseline with a slew of medication and hope for a few more weeks, or return home and help her die in peace and relative comfort.  We chose option two.  I recall leaving the hospital that afternoon for a walk and some fresh air, feeling a huge weight lift from my shoulders.  A decision I had been dreading was complete, and I held on to the hope that we had, at least, a few weeks together still. 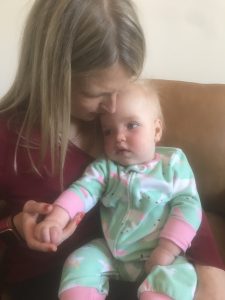 Over the next 16 days, we did not feel alone.  The day we arrived home from the hospital, the palliative care team stopped by, followed shortly by a delivery of oxygen and pain medication so strong I was shocked.  The team checked in constantly.  Her comfort, their highest priority.  We weren’t going to be left blind on this journey, as I had so often felt at times with her disease.

Hannah was fairly stable compared to other children with her condition. The team indicated that she may essentially sleep the next few weeks away. I told myself I could handle the emotional side of things if that were the case.  It wasn’t as simple as that, though.  There were several aspects of transitioning her to end of life care that I was not prepared for.  Much of it had to do with relinquishing the role as caregiver, as we knew it, and embracing a different perspective.  As caregivers, you are programmed to provide.  In palliative care, being a caregiver sometimes means not acting, not providing, not fixing the problem.  Your objective as a parent is now the complete opposite.  This was a fundamentally challenging shift to accept.

Hannah was happiest when asleep, and most uncomfortable during and after meals, which were also triggering seizures with alarming frequency.  And so it seemed the best route toward a peaceful death for my daughter was to remove her nutrition.  The first time I really sobbed, was at the thought of no longer providing her with the home blended food I whipped up each morning.  I remember pulling open the bottom freezer drawer, and staring at the bags of blended up food in 2oz portions.  And it hit me.

“I will never need these again.”

Feeding her healthy food felt like that was the only normal parenting tool I had left.  But her increased comfort was immediate without feeding her.  My sadness was replaced with calm.

The second time I really sobbed was when we were told to taper down her water.  Her course of antibiotics finished, and we no longer needed to flush her tube with water. We were dropping from 50mL to 20mL a day.  This small difference felt inhumane to me.  I pleaded my case not to drop her water, knowing full well this would draw out her death.  I think this was my last-ditch effort to rescind our choice, and the realization that we were active players in this process, not just bystanders.  Thankfully, the team was gentle but firm.  Her comfort once again improved with less.  Sadness was once again replaced with calm.  She was on the right path.  I would eventually get there too.

At first, we monitored her vitals at night, and then periodically throughout the day.  I was curious.  I also wanted to avoid, if at all possible, the chance of her dying alone while we slept.  As her stats migrated outside the normal range, I panicked.  The need to problem-solve and fix was strong.  The team, while sympathetic, reminded us that it was normal for these numbers to change, and that usually, these values are not monitored for this exact reason.  Even though it was expected we never stopped monitoring her vitals. We accepted the fluctuating values.  We accepted that she may die alone.  She was on the right path.  I would eventually get there too.

The team nurse warned us that Hannah would lose a significant amount of weight, and that this would likely be very difficult to watch.  Again, advice that was lost on me.  About 10 days in, her weight loss became so apparent  it broke my heart each time I bathed or changed her diaper.  I was proud of the chunky monkey I had created – testament to her nutrition and the care we were providing a dying child.  Now, we just had to sit back and watch her disappear.  Do nothing.  She was on the right path, but I never joined her on this one.  When I look back at photos from this time, her weight loss is still something I notice with a pained heart.  Sadness never replaced.

Our routine outside of feeding her carried on as normal.  She was mostly comfortable those first few days, but week two brought on periods of restlessness and discomfort where she was unable to sleep.   After a particularly bad round of seizures, she could not settle and was extremely weak and confused.  It felt like her brain was still firing, but her body had no energy to carry out the signal.  We tried ativan, morphine, and oxygen.  Nothing helped.  I suspect her metabolism had stopped by this point.  Our team ordered a pump that delivered a very small dose of sedative every 20 minutes.  This was a pivotal turning point in both her comfort, and ours.  It also felt like the last time we were able to truly do something for her, to help her.  The journey was much more peaceful from this moment on.  She was no longer in pain.  And I think we finally joined each other, side by side, the rest of the way.

Ultimately, her final four days were everything we had hoped for.  She was comfortable, and mostly slept.  We continued our stroller walks for her daily doses of fresh air.  We sang her favourite songs while moving her arms and legs around; the usual dance routine.  Once her breathing pattern quickened and she was no longer responsive, we knew the end was close.  We pushed the coffee table aside and covered the living room floor with pillows.  We camped out there for the next three days, taking the nights in shifts.  The Christmas tree and multicoloured lights cast a warm glow.  Her final moments had my husband and I at her side, holding her hands.  A kiss on her forehead as she took her last breath.  And then there was silence.

Now that I am on the other side, I understand that while my recurring fears surrounding her death were valid, they were inaccurate.  Of course, there is pain, a gaping hole.  There is also peace.  I am able to see now, with clarity, that the last six weeks of her life were difficult for her.  She was suffering.  As much as my heart wanted to choose option 1 that day at the hospital, anything to buy us more time, I knew that choice was for me, and not for my daughter or for our family.  The most difficult aspects of letting Hannah die were the times we tried to fight it.  I don’t regret them.  We were terrified and they came from a place of love.   We feel so much gratitude to our palliative care team for guiding us, without judgement through such a difficult time.  We know how lucky we are that we were together as a family for her final breath – a harmonious moment for the three of us, and a peaceful end to shepherding our daughter through her very short life on this earth.

As I reflect back on our time together, I do find myself thinking of those 16 days often.  How desperate I was for information of other’s palliative experiences.  Much like birth, death doesn’t always follow your best laid plans and it may be helpful to know what is in the realm of possibility. My husband and I, forever changed, think about death in a different light now.  No longer is it some abstract concept, but an inevitable step we will all take.  We are not fearful of death.  Instead, we are curious about experiencing something our daughter has.  I just hope we can be as fortunate as she was.  Comfortable, peaceful, and surrounded by those who love us.

Meredith, her husband and their newborn son Colin live in Toronto, Canada.  Their first child, Hannah, had Infantile GM1 Gangliosidosis.  She died December 5th,2020 at the age of 21 months. 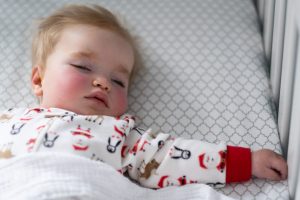