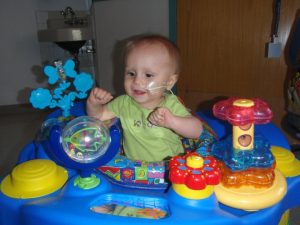 When my son Kai was diagnosed with a brain tumor at 8 months old, he was still breastfeeding.  He had always been a fussy baby and nursing him was one comfort I could always provide, so he nursed  a lot.  As our early days of new mom groups, breastfeeding and cloth diapering turned into the days spent in hospital waiting rooms for sedated MRI’s, brain surgeries and weekly chemotherapy, I was so thankful that I was still able to comfort and feed him through nursing.  It was the one thing that only I could do to help him, and we both really needed it.

After his first surgery to place a VP shunt, he began losing weight.  A few weeks into his chemotherapy treatment, he was losing interest in eating altogether.   When you receive chemotherapy in an outpatient clinic, like the Jimmy Fund, the first thing you do upon arrival each week is check vitals, weight and length.  Each week I would dread going into that tiny exam room, my heart pounding as the scale teetered between the fractions of a kilogram that we were monitoring – 9.61, 8.48, 8.25. The medicine made him nauseous for several days after each weekly infusion, and his continued weight loss each week felt like a tracking of my failure as his parent to keep him nourished.

His doctors suggested a feeding tube pretty early on.  Breastfeeding was a large part of my parenting plan and my identity as a mom. (I was studying to be a lactation consultant and was working as a peer counselor before Kai’s diagnosis.) A feeding tube felt scary. It felt like I was failing my basic duties as his mother.  I was afraid a feeding tube would prevent us from doing things and only make our life harder.  It would be a clear and visible sign that he was really sick. So I resisted.

As we settled into our new routine of doctors appointments, therapies, early intervention, and support groups,  I found myself spending the majority of our time at home trying to get his meds and food in him.  Feeding him was quickly turning from a source of comfort and care to a battle that was wearing us both down.

I clearly remember the day I knew it was time.  We had spent the whole weekend in the house doing nothing but trying to get him to eat.  He was weak and dehydrated and would whimper and cry as I tried to force anti-nausea meds down his throat. Any food I could get in him would quickly come back up. It felt like I was torturing him, while all the while my anxiety about our weekly weigh-in was growing.   He had lost 2 pounds in 2 months, a lot of weight for a baby his age.  That Monday, I called his doctor and told her we were ready.

He was first placed with an NG tube to see if he would tolerate the feeds. We ended up inpatient that week for a shunt check so it was a good time to try the NG tube. I learned about the feeding pump that would help the food push through his tube.  He didn’t seem to mind the tube coming out of his nose, his food was staying down, and my fears about life with a feeding tube were quickly replaced by my determination to keep him nourished and strong. The best part of his new tube was knowing that he was getting the medicine he needed without having to pin him down and force them down his throat.  After all of my resistance, the feeding tube ended up being such a relief.

His peg surgery happened a few weeks later and his mickey button after that.  It felt like a long process and there were plenty of bumps along the way – including uncontrolled pain after the initial surgery, an infection a few days later that landed us inpatient for a week, and, of course, the rights of passage for every tubie mom, ‘feeding the bed’ and the day the the dog ran through his tube, pulling out his button and hurling it across the room while a social worker was waiting at the door!

But overall the tube gave us more options and made life easier. Kai was still getting breastmilk through his tube.  I learned to incorporate blended food into his diet, and we still offered food by mouth at every meal.  We maintained his weight, had less hospital stays for hydration, and were able to utilize an at-home chemotherapy that was given through his tube.

Despite the gains we had made with Kai’s nutrition and quality of life,  his tumor was not responding to the chemotherapy.  A little over a year after his tube was placed, and three ‘failed’ chemotherapy protocols later, we decided to take him off of all chemotherapy to try to better regulate his pain.  While we always had the option to pick back up with another chemotherapy protocol, we made this decision to stop treatment knowing Kai was not going to survive.  I took him home with new meds, focused on keeping him comfortable. At this point, his tube became a vital vehicle for his comfort, allowing me to maintain his medication schedule with fewer pokes.

Week after week, we would check in with his doctors who would still take his vitals, weigh and measure him; and a part of every conversation still included his food intake.  “He is losing weight,” they would proclaim  “Are you not able to keep up with his feeds?” they questioned with concern.  When I fed him he grew fussy and almost always vomited. I had gone back to offering him food by mouth, because force feeding (through a feeding tube) a nauseas gut that was essentially shutting down basically felt unfair. But at each visit to the oncology clinic they pushed me to feed him more.

One particularly difficult day, I called our home VNA nurse asking for help to get ahead of the pain. She rushed over and walked into our living room to find me holding Kai, who was hooked up to a slow feed, whimpering in discomfort. She looked at me and with less-than-gentle advice said, “You don’t have to feed him like this anymore. His body doesn’t need it, and it is only making him more uncomfortable.” I knew what she was saying and as much as I didn’t want it to be true, I was so thankful that she gave me permission to trust my maternal instinct and listen to his cues.

I unplugged the pump

When we went into the hospital the last time, he was still getting 1-2 cans through his tube slowly throughout the day. It felt like just for show.  An ounce here and an ounce there, just enough to keep people from asking.   We fed him by mouth anything he wanted, mostly ice cream and fruit smoothies.  It felt so good when he chose to eat, but when he turned away I no longer struggled to force feed him.  I knew by now his body just didn’t require all the nutrition it once did.  We entered the hospital that last time because he was in pain that I was not longer able to manage at home.  He showed symptoms of a growing tumor, shunt malfunction, sepsis and fungal infection. The ICU offered shunt revision but warned that surgery would be really hard on him now.  The fungal infection would take months to clear and his tumor, well we already knew there was nothing we could do to stop it from growing.   I decided not to do surgery, or treat the infections.  I asked to be  transferred out of the ICU and back to our regular floor  where the nurses knew us.  I also decided to stop using his tube for anything except meds, which were primarily through his pic line by this point. I told the doctors, if we were stopping all other treatment then I was stopping food and hydration as well.  It felt like the obvious, most compassionate decision I could make and I made it without question.  The tubes and machines were removed from his body and we were transferred to the comfort suite on our regular floor.

When we decided to give him his feeding tube I never considered the fact that I may someday choose to stop using it.  I never considered the fact that for some people in some situations this can be an agonizing decision to face.  His feeding tube gave me the chance to be his mother again. To feed him and keep him free from pain.  With the help of a seasoned hospice nurse I learned to take Kai’s lead.  When he was in fact dying, his feeding tube did not hasten or lengthen his life. I am so thankful I had the support to make these decisions, all along the way,  without guilt or controversy.