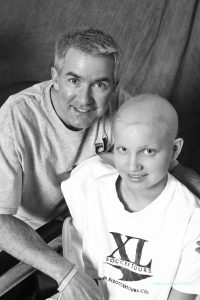 September is Pediatric Cancer Awareness Month, which I think is perfect timing to explain the name of this organization.

In a recent Boston Globe article about Courageous Parents Network, I am quoted saying, “Parents are going to try to do the best they can, no matter what. They’re not choosing to be courageous. However, I look at these families and I say, ‘Wow, what you’re doing is absolutely amazing.’ I wanted the title to remind them of how amazing they are.”

The reporter, Steve Maas, spent five hours with me and the Courageous Parents team and the original piece was much longer than what was ultimately published. A lot got cut, but fortunately not this quote. Which is good. Because it is the most important part.

I put a lot of thought into the name of the organization when I founded it in 2013. In many ways, Courageous Parents Network is a terrible name – too long, too easy to misspell, too laborious to enter into the browser or email address line. But Parents had to be in there—we’re for parents, by parents. And Network had to be there, because that’s what we’re building. So then I needed the definer – the differentiating word that captured just who these parents are. And Courageous was ultimately the only word that would do.

The poet and philosopher David Whyte agrees. I absolutely adore David Whyte. He is wise and his writings and interviews help me find my humanity and remind me that we are part of a continuum that is bigger than our individual selves or our individual situations— that we can do this thing called Life. A few months ago, I picked up his new book CONSOLATIONS: The Solace, Nourishment and Underlying Meaning of Everyday Words. In it, he reflects upon a series of individual words that begin with the letters A through Z. Words like: Anger, Beauty, Beginning, Despair, Help, Longing, Pain, Rest, Silence, Vulnerability, Work. Opening the book for the first time, I was excited to see that he included the word Courage and I immediately went to that word to see what he had to say.

He begins by reminding us that the word originates in the French word for heart, Coeur. “Courage is the measure of our heartfelt participation with life, with a community, a work; a future. … To be courageous, is not necessarily to go anywhere or do anything except to … live through the unending vulnerabilities of those consequences. Courage is what love looks like when tested by the simple everyday necessities of being alive.”

And then, to illustrate his definition, he suggests that parents are the best example of courage. He could have invoked a soldier, a policeman, a teacher, an athlete. But no, he chooses a parent.

“No glamour in the outward show, deserving of no medal, but on the inside a heartfelt, robustly vulnerable and courageous realigning of one’s life with another.”

And there is no group of people for whom this is more true a description than parents who are caring for and loving their child with a serious illness: completely vulnerable with questions and worries, with no real roadmap and certainly no crystal ball, these parents give themselves over unconditionally to the love and care of their child. That it doesn’t feel like a choice doesn’t make it any less courageous.

One of our parent advisors whose son died from a rare condition told me how exposed and limited she felt in the hospital day after day as she tried to understand what the doctors were saying and as she worked to advocate for her son. “I think that if you’d told me I was courageous, in those moments, it would have helped a lot,” she said.

So that’s why we’re called what we are. To remind parents of their strength and their awesomeness. And maybe it won’t really stick until later, when parents remember, and that’s OK too. David Whyte closes his musings on Courage with this:

“On the inside we come to know who and what and how we love and what we can do to deepen that love; only from the outside and only by looking back, does it look like courage.”