I’ve been gazing out my window at this tree –  a lot, like for the past ten months. The same ten months since my son Lucas left us. It’s not a special tree. It’s not the biggest one in our yard but it fills the view from this window nicely. It grounds me when anxiety leaves me feeling unmoored. It is a source of calm. I feel it weathering time at a slower pace than humans can and I’ve watched the weather work each season’s magic on it. Winter snows clumped and clung to the bare branches adding some grace and charm to what was otherwise desolation. Today, I witnessed the first sign of new growth, just those tiny yellow buds that will become new green leaves. 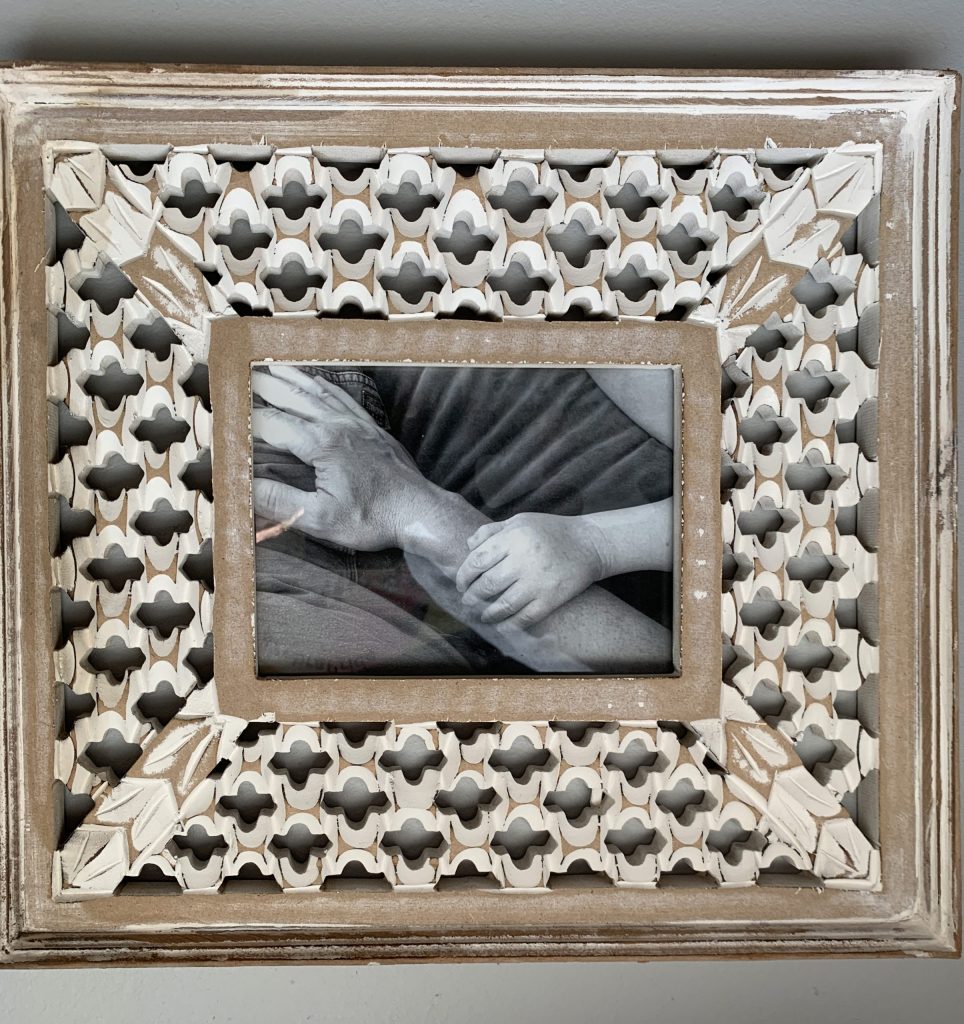 If I shift my gaze just a foot to the left of the window, I see one of my favorite photos of Lucas and me together. It’s just his hand grabbing my arm. I can almost re-live the feeling. It feels like all I ever wanted and the thing I want back the most. His hand to hold mine.

When Lucas was born I didn’t get that first sign of connection; that moment where the infant fist squeezes tight on the parent’s finger and the bond is formed. I longed for it then. I waited for it to come for years. We didn’t know at the time that Menkes Syndrome deprived him of the strength to do even this most instinctive grasp. Years later, at maybe age eight, he could finally manage it. I reveled in it. We all want this affirmation of connection. Consider the gesture you offer someone who’s going through a tough time. You squeeze their hand, maybe pump it twice to double the gesture’s power. I needed that from my firstborn. Even after I had the diagnosis to explain the why, it was only the logical side of me, not my heart, that could give up on expecting that tug of mutual need-comfort-love.

The photo is incomplete, as photos always are. It only shows our arms, no faces. Synecdoche right? The part standing in for the whole. A lot gets left out. Your mind has to fill it in. I feel my memories of my son are getting to be this way too. They offer fewer clear moments and rely on more and more parts to be guessed at. Sometimes that photo brings tears of joy and remembrance, other times, most times, the tears flow from ache. I force my attention to stay on the photo and stay with those thoughts longer than I think I can bear. I owe Lucas this much.

And then I have to break my gaze. Fortunately it’s a short journey back to the tree. Back to calm and relative peace.

I mentioned that this is no special tree. It’s not the “Lucas tree”. In fact, just beyond it are three trees which are meant to be special. These are the three Lucas trees. His ashes sit in an eco urn in the soil where they root. Soon these trees called Red-Buds will defy their name and bloom in purple. That seems special. This other tree, the one in my sight line, maybe it’s a maple. It’s a bit scrawny. It’s just the tree I can see, halfway between my window and Lucas’ trees. I can’t decide if I’m glad or frustrated that it mostly obscures my view of the three Lucas trees. But I have decided it’s been keeping me sane.

Novelist Richard Powers wrote “A tree is a passage between earth and sky”. I’ve never been a tree person. Nothing against them, I just never gave them much thought. My dad can name most of the trees he sees. I can tell you which ones are evergreens, if you ask me in the winter. When I lived in Los Angeles my parents could not pretend to appreciate the City of Angel’s charms, but they did take an interest in the trees. They were disappointed I couldn’t tell them anything about any of them.

If I crane my neck a bit I see past the trees to our red shed. It was seldom visited all winter. Now the change in the weather has us back there grabbing yard furniture and our bikes. My ten year old, Alex, went back there a few days ago and saw Lucas’ wheelchair. It’s mostly hidden under a tarp. Alex was clearly put off by this. He brought it up to me. I could read in his face thoughts like, “Is it okay to keep the wheelchair back there? Not in a place of honor, just among the sleds and bikes and garden tools?” 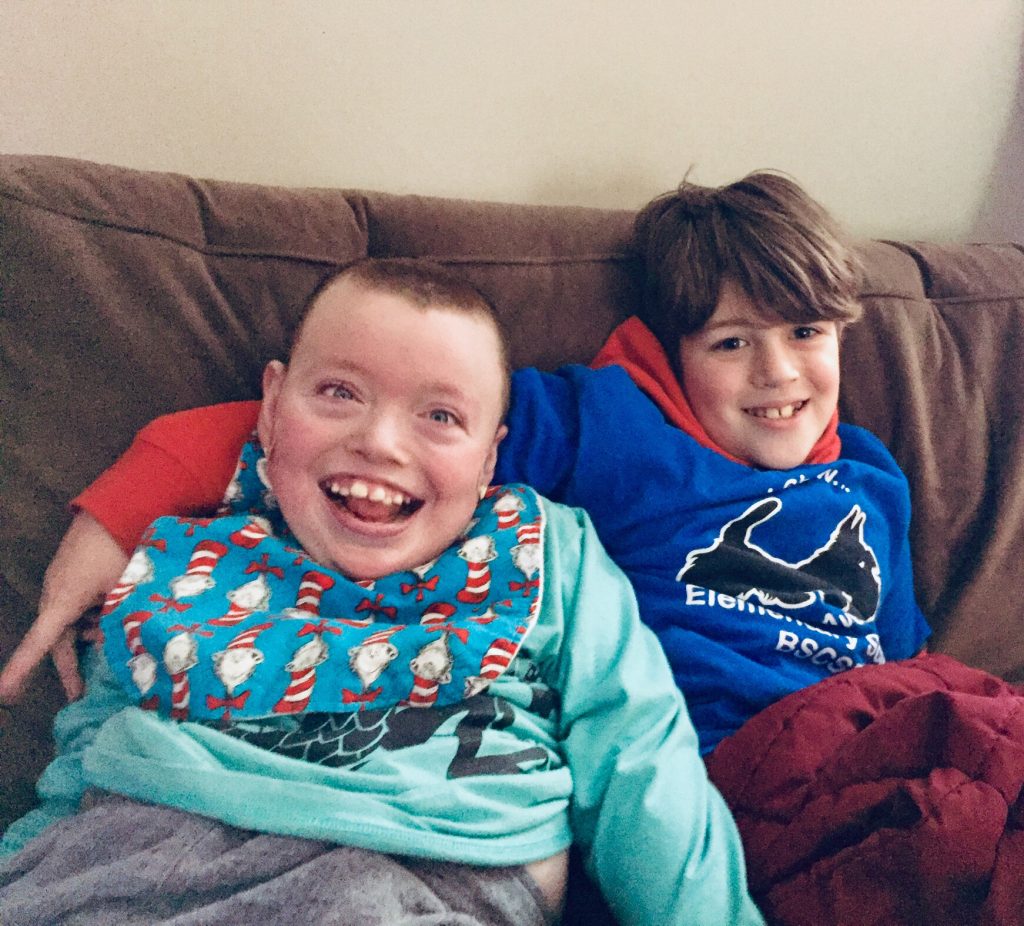 As we talked, we both admitted our memories of Lucas had shifted over the months, focusing more on him lying on the couch rather than seated in his wheelchair. We couldn’t decide if the chair represented less happy times. But Alex was sure the couch represented the fun times, and to prove it he pulled up a special photo of his own. Lucas seated on the couch beside Alex.

You need to know this moment was a rarity and a source of great pride for Lucas. He wasn’t able to sit unassisted except in his wheelchair. But with the right pillows and positioning he could maintain a seated posture for a few minutes, especially if he had his brother to lean on. It made him look so big. And he knew it. You can see it in Lucas’ grin, it’s pure delight at doing the thing Alex gets to do.

For Alex maybe this was his longed-for “normal” bonding moment that was too long in coming. Shouldn’t two brothers sometimes sit side by side together? Like the hand grasp in my photo, was Alex’s moment of visceral connection made more precious by the years spent waiting for it?

When Alex seeks solitude outdoors his refuge is his tree house. He’s usually silent there. It shields him just enough from my view that I can worry where he’s gone. He recently asked that I haul over a sawed off section of tree trunk he found in the woods. It’s now a seat for him in his sheltering tree: his pensive perch, his thoughtful throne. 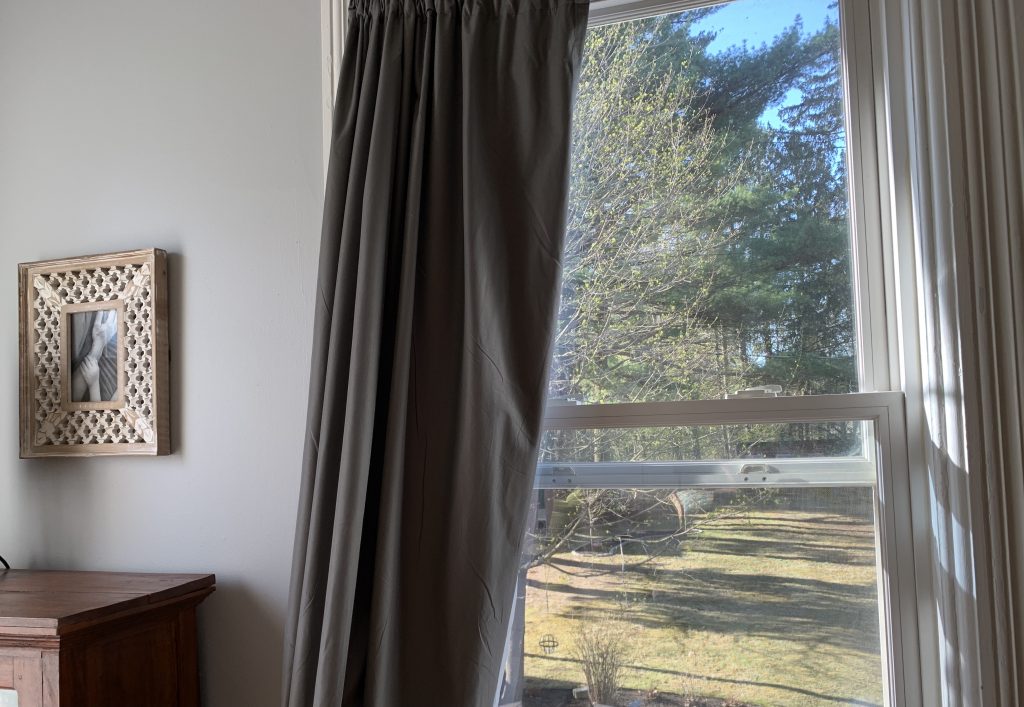 I get it. My tree comforts me even from a distance, viewed through glass. It slows my roiling mind. It connects this earth where my boy is no longer by my side to the skies above where it feels like he might be found shining among the stars. I’ve never been a tree guy but I would turn to nature to cope with loss and pain. The ocean, or mountains, things vast and enduring enough to make us humans and our pains feel small. Is that the real power of nature? Its ability to remind humans to get over themselves? 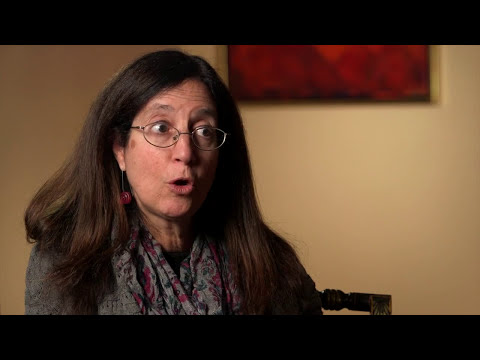 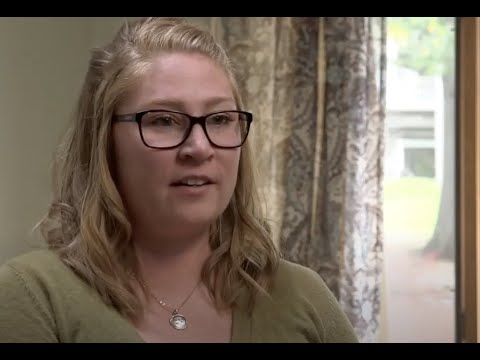