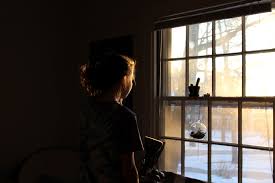 Looking out my home office window, I often see the teenaged boy from next door. He looks like my son Robby at the same age – fair-haired, tall, and gangly. That boy likes to shoot basketball in the same hoop in our cul-de-sac. The sound of the ball bouncing on the pavement and swishing into the net reminds me of afternoons when I would hear my son doing the same thing after school. I glimpse familiar, slightly awkward gestures, the disheveled hair, the expression of concentration. Robby died in 2016, so I know it’s not him, but sometimes I do a double-take and it takes a second to sink in…

I do like to be reminded of my son as he became a young man, with a strong body and strong feelings, yet not far from the tenderness of childhood. I smile thinking of the small and big milestones this other boy has ahead of him. Sports triumphs, taking pictures before prom, throwing a mortar board in the air, the nervous excitement of leaving for college.

That recognition also brings sadness as I am reminded that Robby’s not here, and he will never be back. The boy next door will grow to experience the things my son did not get to.

I felt a similar tug during Robby’s illness. His life was so complicated, so often interrupted. Pain, nausea, or brain fog (and sometimes all three) hung over his daily life, making everything harder. When his illness flared up, Robby could spend weeks in the hospital. It hurt to see him struggle to make up for lost time, often battling a new round of physical debilities, several times returning to school in a wheelchair. 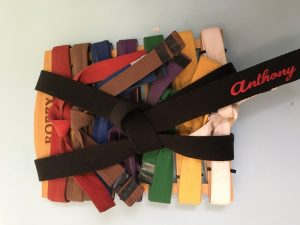 But Robby’s fortitude was powerful. After the first few episodes he regained his considerable strength, and he achieved a lifelong goal of becoming a black belt in karate the summer he turned 18. 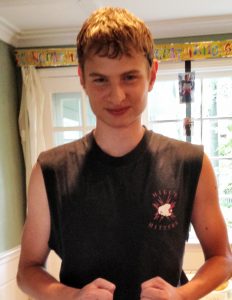 His illness flared up again during his freshman year in college, but Robby insisted on staying at school. I was conflicted – both proud of his perseverance and pained by what it cost him. I always admired his ability to look past his own limitations and focus on what he could do right now.

Taking him back to his dorm after one hospital stay, I was struck by the sight of carefree college students walking and laughing around campus. I felt overwhelmed by anger that my son was facing debilitating complications – both physically and emotionally – that most of them could not even imagine. I didn’t begrudge them their youthful fun, but I wished my son could have that untroubled experience.

As Robby’s illness failed to respond to treatment, my husband and I began to reframe our image of how our son’s life would unfold.

The doctors continued to assure us that Robby’s condition was not typically life-threatening, but there were long-term implications even for a chronic illness. The chemotherapy treatment (to suppress his overreactive auto-immune response) raised his risk for future cancer, and it could potentially leave him sterile. It was terrifying to ponder yet another danger lurking in his future, and it was heartbreaking to think he might miss out on being a father.

In the near term, we began thinking that Robby might need more than four years to finish college, so he completed some classes online. Perhaps he would need our support more long-term, and we could convert our basement (with a separate entrance and unused bathroom) into an apartment for him.

In problem-solving mode, I could focus on work-arounds for the complications of his everyday life. Caregiving for a young adult was about balancing his needs with his hunger for autonomy. Sometimes he wanted to vent rage about his obstacles, and sometimes he just wanted to keep moving forward undaunted. I needed to both acknowledge the injustice that was his burden and remain ready to address what was realistically possible.

With my child facing life-altering challenges, it felt somehow wrong to concentrate on the things I might miss. It was happening to him, and my motherly hope wanted nothing more than to ease his way. For most of his illness there was little certainty about the future. So I took my cues from Robby and focused mainly on the present, on the problems I could solve, on finding happiness of this moment.

Still, underneath all the pragmatism, I was profoundly saddened by my son’s limitations. Primarily for him, of course, but also for the impact on my life. I curtailed and ultimately left my job to focus on caregiving – the right choice, but still tiresome and unrelenting. The fear of losing Robby was ever present, and it loomed in the background of even happy times as I wondered privately (rarely aloud) what our family in the future would be like without him?

Even now I feel both sorrowful and infuriated because…

… I won’t see him grow into an adult with wisdom and confidence.

… I won’t delight in his giddy joy being in love.

… I won’t be a grandmother to his children.

I sometimes have conflicting feelings around the cousins and friends who were Robby’s peers as I watch them in their own lives. They graduate from college, move to new cities, launch careers. As much as I share the pleasure of their maturity and hopeful futures, I can’t help but be reminded that they will continue to experience life in ways I wanted for my son.

When a child is ill or has died, their limitations, or their absence takes up a lot of space where the stories of their life should have been. 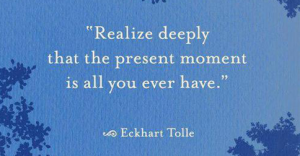 The value of living in the present is a well-worn cliché –and it is laudable advice, but it conflicts with the natural tendency of parents to dream about their child’s future. When the real world takes over, parents get used to unfulfilled hopes. An enthusiastic gymnast will probably not compete in the Olympics. An essay with a gold star does not usually lead to a Pulitzer Prize winning career.

Eventually we realize that the lofty dreams are less important, and we learn that the smaller, ordinary moments matter immeasurably. Cooking a meal together, staying up late playing a board game, taking an early morning walk on the beach. It is these moments that comprise a rich family life. Not the accomplishments, but the time together.

It’s true for everyone – while the future shortens before us, we still have the time to appreciate now.

As I write this, I see the boy next door outside shooting hoops again. He seems to have grown a foot over the summer, and the outlines of a future strapping young man are unmistakable. He’s joined by his father in a game of HORSE – and I can hear them playfully trash talking each other through the game.

I silently wish them well. I imagine their pleasure planning future milestones, and with luck and grace, they will revel in every twist and turn of the path. But most of all, I hope they enjoy the moment right now when they are simply happy to be together.

Our Blogger in Residence: Caryn Anthony is a nonprofit consultant and executive coach from Silver Spring, MD, and is also chair of the Patient and Family Advisory Council for Children’s National Medical System.  She is the author of “Any Way the Wind Blows,”—a blog geared for families raising a child with a significant medical condition.  Her writing has also appeared in The Huffington Post, Grown and Flown, and Modern Loss. 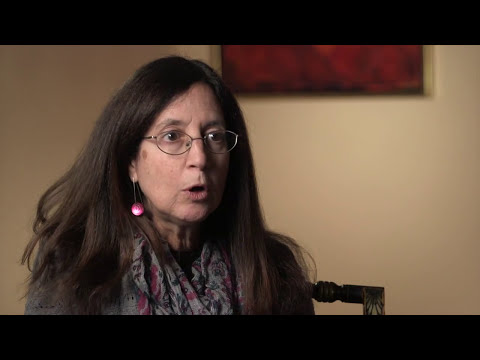 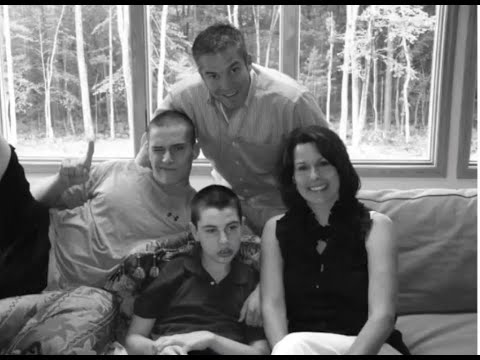