The Hallmark version of my Thanksgiving from 2015 makes a great story. Overcoming adversity, plucky can-do spirit, and heartwarming gratitude for the support of family and friends.

And it is all true, it’s just not the whole story.

My son Robby was admitted to the hospital in early November with a flare-up of his chronic blood disorder. His status quickly deteriorated, and he spent weeks in the ICU struggling to get enough oxygen, and at risk for intubation. The medical team was on high alert, he was miserable, and we were terrified.

So, we were deeply relieved when he finally started to improve, and the team considered releasing Robby from the ICU to the regular floor. He was nowhere near ready to leave the hospital, but the worst of the danger had passed so he was nearly ready to leave the intensity of that dark room with the ceaselessly beeping monitors. 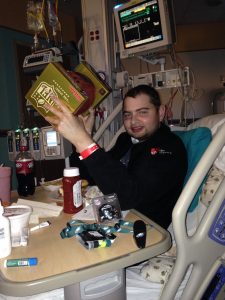 Thanksgiving hadn’t even been a consideration in the throes of the crisis, but as the tide turned, my family began to think about some way to observe the holiday. My daughter Laura and I strategized how we could cook and transport a modest feast for our family of four. And Robby began looking forward to fewer intrusive interventions, and a day enjoying homecooked food and his favorite football team.

After waiting anxiously all of Wednesday for the doctors to approve his transfer, we breathed a sigh of relief when we got the call that Robby was settled in his new room. It was finally possible to picture the light at the end of a very dark tunnel – certainly not a permanent all-clear, but it was the best news we’d had in weeks!

Early the next morning, after I got the turkey in the oven, I sent an email to a few family and friends thanking them and sharing the happy news that Robby had turned a corner. Here’s part of what I wrote: 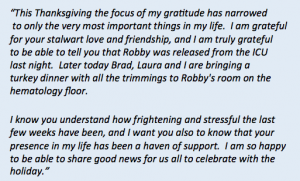 “This Thanksgiving the focus of my gratitude has narrowed to only the very most important things in my life.  I am grateful for your stalwart love and friendship, and I am truly grateful to be able to tell you that Robby was released from the ICU last night.  Later today Brad, Laura and I are bringing a turkey dinner with all the trimmings to Robby’s room on the hematology floor.

I know you understand how frightening and stressful the last few weeks have been, and I want you also to know that your presence in my life has been a haven of support.  I am so happy to be able to share good news for us all to celebrate with the holiday.”

That afternoon we filled several shopping bags with containers of turkey, mashed potatoes, gravy, molasses cookies, and apple cider; and we felt so lucky to walk into the hospital feeling cautiously hopeful and even a little festive. We happily shared our goodies with the residents and nurses stuck on duty for the holiday, and then packed up leftovers for Robby to enjoy later.

It really did happen like that. The worry and relief, the heartfelt email, the nurturing cooking. I can still picture where we all sat in Robby’s room as we ate dinner and watched the game.

But the rest of the story is more complex, including the sadness we felt confronting my son’s serious illness, the inadequacy of any holiday “celebrated” in a hospital room, and the inevitable disappointment because everything was far from cheery and normal.

Robby was glad to be out of the ICU, but he still felt awful — fatigue, pain, nausea. He was frustrated that he didn’t know when he would be released from the hospital, and he was daunted as he realized that the next stage of his life would be arduous and profoundly changed.

He wanted to enjoy the special meal, but he had little appetite. He wanted to feel connected to his family, but the trauma of his experience left him feeling isolated. And, adding insult to injury, his beloved Philadelphia Eagles lost against the Detroit Lions 14 to 45.

Certainly not a picture-perfect Thanksgiving experience.

For families where uncertainty and fear and loss are regular parts of their lives, holidays are extra tricky. The surrounding world is full of messages and images that describe “the joy of the season”. Other people want you to be happy, and while their intentions are often kind, sometimes I didn’t have the energy to make other people feel better with a forced smile. I valued those who could acknowledge that everything wasn’t fine, and then let us participate (or not) as best we could.

My advice is to try to keep expectations modest, be flexible, and above all, be authentic. It’s great if a holiday can offer fun, or hope, or just distraction. But sometimes holidays are also reminders of limitations or disappointment or loss. Be ready for both sides…

It turned out that 2015 was the last Thanksgiving we would have with Robby, and he died about eight months later. Unsurprisingly, all holidays were excruciating the following year as we felt his absence so acutely. Not exactly the warm and fuzzy ending from a sentimental Hallmark movie.

Somehow, Thanksgiving still remains my favorite holiday. I love a cozy, low-key day centered around comfort food and togetherness, without the complications of decorations or gifts. And I especially appreciate the people I share it with, those who see all aspects of the story, blending our happy and sad experiences to create a picture with real depth and richness. These are the qualities that bring meaning to a holiday, and make me thankful.