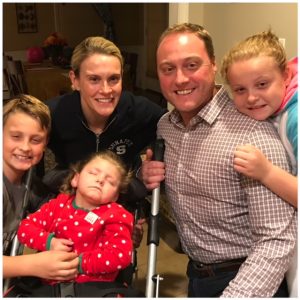 Throughout our daughter’s short six and half years with us, my husband and I had numerous discussions about her end of life and how far we were willing to go in her treatment to keep her alive. Luckily, we were on the same page with almost everything. I did not know how rare that was for couples until I spoke with our palliative care team.  There was one main principal that guided us: her quality of life mattered above all else. Once that was compromised then we were headed down a different path.

Our daughter’s disease was rare and caused severe disabilities and medical complications.  Her whole medical team was very honest with us and told us in the cases of these children with rare diseases, it’s not the disease that kills them per say, but the side effects like pneumonia, digestions issues, or sepsis. We were mentally prepared for this early on, but no matter the amount of mental preparation you do it can all go by the wayside when a parent brings their heart and emotions into the mix. My husband and I worked very hard to balance each other out as our daughter’s health deteriorated. He was always weighing out the options, listening very intently to the medical team, and taking time to sit with the information before reacting. I, on the other hand, used my gut response more often than not. I could almost physically feel the pain my daughter felt, when her fevers were getting worse, I found myself getting hot as well. My reaction to her quality of life going downhill fast was anger. I was beyond angry that this little girl who did not ask for this disease had to suffer in this way and I felt hopeless. This new quality of life she was living was simply not good enough!

Throughout the spring of 2018 our daughter had pneumonia and was hospitalized twice, once due to the pneumonia itself and the second time due to a massive nosebleed that caused her to lose so much blood, she needed a blood transfusion and then developed pneumonia again. It was during this second hospital stay that we started to speak with her palliative care team and discuss what the next steps were. My husband and I were in agreement that a life lived in and out of the hospital was not good enough for our girl.  The difficult part was that we didn’t have the answer to the question of how many hospital stays are too many? The night after that discussion our daughter was doing so well, she was going to get transferred out of the ICU onto a regular floor. About an hour before that was to take place a blood clot went into here lungs and she stopped breathing. My husband was there at the time and saw the whole medical team jump into action as the code blue alarm when off. The had to intubate her and my husband stood by watching the monitor numbers dive down. I got his phone call after our daughter was settled and he explained everything in his calm and analytic way, then a pause and he broke down sobbing saying that was the most excruciating thing he had ever seen. We made the decision right then and there during that phone call that our daughter would not die in the hospital. It was too sterile and clinical.  To go into a building and then leave without our beautiful girl was more than we could handle. It was not a decision we took lightly, her medical team was one of the best in the world and this is not a reflection on the wonderful, compassionate care that she received every time we were inpatient. Rather, this decision was made because of that care, we knew her palliative care team and all of her doctors respected our wishes and really listened to us as we made this agonizing decision.

After that hospital stay our daughter’s health was not the same, she never got back to her baseline. Her new normal involved lots of suctioning, and breathing aids. She hated all of it! She was also more heavily medicated than she’d ever been. My husband and I both knew that we had “turned the page.” Her school nurse used that phrase to describe when a child needs more medical interventions and possibly machines to stay alive. We knew the next step was a tracheotomy. For many people that is not a huge step, but for me and my husband we knew that that would only prolong what her body was not able to do. We were waiting for the other shoe to drop-the next cold that would hit and turn right into pneumonia.

We didn’t have to wait long. About 4 weeks after we were released from the hospital, she got another cold and I could tell that it was turning worse rapidly. This time we called her palliative care nurse that makes home visits.  She knew right away something was up since we rarely reached out to her. She was able to stop by later in the day and confirmed what we already knew, pneumonia and it most likely never really left her. It was during this conversation that she told us if we chose not to go into the hospital within the next 24 hours, we would now be turned over to the hospice team and they would only be treating for comfort. My husband and I were unanimous in our decision to treat for comfort.

From that point on we had a nurse visiting us daily and we started to make tentative plans. The first thing we did was to contact our parents and siblings. I was certainly naïve at first, I thought we had weeks, maybe a couple of months. The nurse explained my daughter had a week or two at most. Making the decision to turn it over to hospice felt very extreme and we asked each other many times a day if this was the right decision. But then we always looked at what our guiding principle was: quality of life. The quality of life now was not enough for our little princess. Our hospice nurse started our daughter on pain relief right away and ironically during the last week of her life, she was the most relaxed she had been in over 7 months.

We did something unusual during our daughter’s last week of life and took a page out of my grandmother’s book when she passed away. We invited all of our close family, friends, and all the people who were involved in my daughter’s life to our house. We basically had an open house for the last week of her life. We were open with everyone and spoke with her siblings, who were 12 and 10, at great length about the process. We saw so much love and compassion from so many people and the love they all had for our daughter still brings me to tears.

During this last week the hospice team helped us contact the funeral home and her medical team at the hospital. Ironically it did give me some comfort planning aspects of her funeral, I am a practicing Catholic and I hold my faith close to my heart. It’s been my faith that has helped me in the months since my daughter’s death. My husband, on the other hand, does not practice any religion other than the one golden rule: do good to others, so the planning with our church rested mainly on me-which I didn’t mind. We were able to have our parish priest perform her Last Rites at home, which was very comforting to all of us. I will never forget when he blessed her and then turned to us and said “I have never performed Last Rites on such a pure soul.”

During our daughter’s last couple of days her body fought so hard, it just did not want to give up. In all of this, the last 24 hours were the hardest on both me and my husband. It was excruciating to feel her heart pumping wildly and her breathing so erratic. Our hospice nurse had explained that this might happen, but it doesn’t matter how much medical info you are told ahead of time, it’s beyond what a parent should have to endure. My husband still will not talk about the last 24 hours of her life. I feel as though her soul left before her body shut down. My husband and I were both beside ourselves and thankfully my parents were with us.

When my daughter took her last breath, she was being held in my arms and my mother’s arms. There was such a sense of quiet after she passed. We then all took turns holding her and praying as our hospice nurse called the funeral home. We took a lock of her hair and she was dressed in her favorite soft princess pajamas that her brother and sister picked out for her. I knew that we couldn’t prolong it when the funeral home took her body, strangely enough I knew that her soul wasn’t there and it gave me comfort. I do remember telling the funeral director to be gentle, and I explained that she’s got special needs. He was very kind and nodded and promised that she would be treated with dignity and respect.

Our family is still healing and my other two children have reacted to their sister’s death in different ways. My oldest daughter is in middle school and her concern was that people would feel sorry for her and only think of her as the girl who lost a sister, while my son, who was 10 at the time, has been more emotional. He still cries himself to sleep about once a week and sees a grief therapist on a regular basis. We have been very open and honest with our children. As a family we talk about her all the time. She is still very present and very much a part of our family of five. My husband and I have both said that we would not do anything differently, it worked for our family. I don’t think there is a set path to prepare a family for end of life. Each family will have their own ideas and values. I do think communication between parents is essential and the more voices that get into the mix, the harder the process will be. I am thankful that our families respected the decisions my husband and I made. We were all on the same page, which has helped tremendously.

Having conversations with a palliative care team and knowing that they will help you in the process is very important. It’s a morbid conversation that parents really cannot have with just anyone. It’s a painful and lonely road for parents and these are such personal choices that having the ability to make informed decisions about end of life that is right for your own family need is essential.