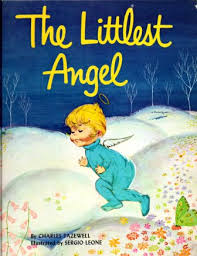 My family of origin and the family I have created with my husband Charlie recognize Christmas in its two parts: the first and most important, the story of the birth of Jesus; the second, Santa and lights and merry and gift giving. Growing up in the 1970s, I loved all of the stories that came in the television Christmas specials: Frosty, A Year without a Santa Claus, Santa Claus is Coming to Town – specials that are obviously not about the birth of Jesus. I also loved The Little Drummer Boy which absolutely is – it tells the story of a little boy who follows the North Star to Bethlehem where he discovers the baby lying in the manger surrounded by animals.

This notion of the North Star lodged in my mind and my heart. And it was reinforced by a book that we read every Christmas Eve in my childhood: The Littlest Angel. In this story, a cherubic little boy, likely 4 or 5 years old and dressed in a blue onesie with padded feet, arrives in Heaven. The sweet thing struggles to adjust to the serious goings-on of his fellow Heaven dwellers, all older, who are busy with mature activities. He runs when he should walk, his halo is askew, his nose is always running; in short, he is a mess. Called to the kind angel Peter, he explains that he is lonely and misses the earthly pleasures he has had to leave behind, including most especially a box of treasures he has collected in a simple wooden box. Peter ‘brings’ the box to Heaven, after which the Littlest Angel is as happy as could be. Until he is called, with all the other angels, to make a gift for the son of God who is to be born. While others are crafting incredible works of art, the Littlest Angel is bereft as he has no talent to make anything. At the last minute, he contributes his most precious box to the pile of gifts. 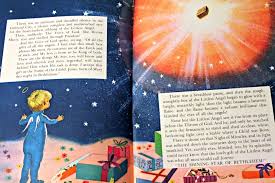 The hand of God comes over the pile and the Littlest Angel, afraid he has offended God with him humble offering, hides in shame with tears streaming down his chubby cheeks (the illustrations are very heart-wrenching). The hand of God, in the form of a light, hovers over the box and lifts it up saying that this is the present that pleases him most as it consists of treasures from the Earth beloved by simple people. And with that, the box elevates and becomes the North Star.

This was my most favorite of all the books we read at Christmas; and when I married into Charlie’s family, I gave this book to his parents and they lovingly let me add it to their Christmas tradition.

And then we learned that our second daughter Cameron had a fatal disease and I banned this book forever after. It hits too close to home.

The part of me that engages in magical thinking – don’t all of us do that in some way? – wonders if in loving the story so much I ‘invited’ my own little angel into my family’s life.  I know this is silly and stupid and untrue; but even these 19 years later I can’t help it. I know I have to let that go. What I do intend to hold onto is a belief in the North Star as a beacon for self-direction. I believe we each have our own North Star and I hope everyone reading this finds and follows theirs in the year ahead.