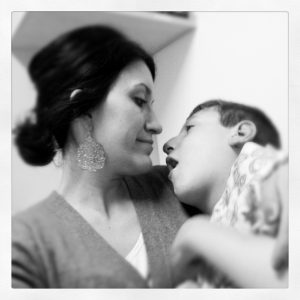 I will never forget the doctor’s words: “I’m prescribing him morphine.” In my mind I can still see my husband and myself sitting next to Sam in his wheelchair in that small clinic room. The doctor had spent 20 minutes examining Sam, even watching him have an episode.

Sam no longer needed to be asleep to stop breathing; it was now happening when he was awake. With changing anatomy and increased muscle tone, his tongue could occlude his airway at any time, and the smallest amount of swelling from a simple cold made it much worse. Unable to ambulate and with no head control, he could no longer keep his own airway open. He knew it, too. Nothing scared us more than the panic in his eyes during an obstructive episode. To this day, I have never encountered a look of terror like that.

Each night, positioning him for sleep, we played a ridiculous game of pillow Jenga. Carefully and methodically, we would prop his chin with a series of cushions and pillows, maintaining gentle upward pressure to keep his airway open. It was a volatile situation, to say the least: one wrong move and the tower would crumble. More often than not, despite our efforts, the pillows would shift, and we would be awakened by his gasps for air. From deep sleep we were suddenly running at full speed to Sam’s bedside, often to find him already turning blue. A quick chin thrust and Sam would take a big breath. How long had he been apneic? We never knew.

“Morphine? Are you sure?” I couldn’t wrap my mind around the doctor’s words. I had memories, as a teenager, of my great uncle living with us as he neared the end of his life. I vividly remember the hospice nurse handing the bottle of morphine to my parents with instructions on when and how to use it, explaining to us how the end might look. I had never heard anyone talk so candidly about death, and it was demystifying. I wasn’t afraid anymore. We were at peace, with a plan to ease his discomfort if he struggled to breathe. There would be no panic.

Now, hearing that my son needed morphine, it meant the beginning of the end. Or at least I thought it did. I was apprehensive. There was a definite stigma attached to it. What would I tell Sam’s home nurses? Would they refuse to use it? Would they judge us for giving it to him?

I voiced my concerns to the doctor. It wasn’t until he explained in simple terms what we were doing that we understood how morphine aligned perfectly with our wishes for “comfort over cure”. When an airway occludes, the primal instinct is to take a deeper breath. When the airway is blocked and prevents this, the gasping – and the panicking – begin. Air hunger. 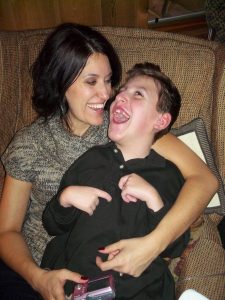 Sam’s doctor taught us about air hunger, explaining that morphine attaches to certain receptors in the brain, calming that primal reflex to gasp for air. Eliminating the panic. The doctor assured us that used appropriately, morphine would not stop Sam from breathing or hasten his death. Yet again, I was reminded how education takes away fear.

In an effort to ease my maternal guilt, and to reassure Sam’s nurses that adding an opioid to our already-full drawer of medications was a necessary next step, the doctor wrote in Sam’s chart:

“He can have a lot of distress with this. There is not, unfortunately, any simple remedy. If you were considering procedures that would prolong life, a trach may help but I agree that this is really not in his best interest and would be prolonging suffering. I am going to provide some morphine to use if you feel he is in distress from breathing issues. This will NOT accelerate a dying process if one is occuring, it is simply a humane way to give him comfort.”

We left clinic with the prescription and an overwhelming peace, knowing we now had a “tool” to use at home to bring Sam comfort in times of distress. I realized I had been asking Sam’s doctors for exactly this for the past 14 years. It wasn’t until now, when his symptoms had become so extreme, that I was finally given something I felt could truly help him.

Although a bit apprehensive, Sam’s nurses agreed this was an appropriate next step. As it turned out, more often than not, he needed morphine when they were not on duty, leaving us to make educated decisions on when it was necessary. Initially we were a bit nervous, but we eventually realized that no one else knew Sam better than we did. We were the experts he needed.

Over the next year, morphine was exactly what Sam needed. His episodes were happening more frequently. Unfortunately, it was not long before a new problem developed. Even tiny doses under the tongue became unbearable. He would choke and gasp, and as I suctioned his mouth I knew full well I likely suctioned out the morphine. We were advised to administer morphine via his gastrostomy tube. It was less effective and slower, but it was the best we could do.

As Sam’s body continued to change, his symptoms became more severe, and his condition deteriorated rapidly. Severe neuro-storming episodes seemed to come from nowhere, and were excruciatingly painful. His body would stiffen, straight as a board. Sweat quickly soaked his sheets, and he would scream in pain. Morphine via gastrostomy took too long to work. We needed something faster.

Palliative care offered another medication: intranasal midazolam, intended to stop neuro-storming episodes quickly. Although not an opioid, obtaining approval for it proved to be extraordinarily difficult, generating copious email correspondance with physicians, pharmacists, social workers, and state employees. Requests for midazolam for pediatric Medicaid patients were uncommon: no one knew which form to fill out, which box to check, which desk to darken. The paperwork and red tape were maddening, for all of us.

One day, 6 months and 85 emails later, my phone rang. It was a gentleman from the state, asking if I was awaiting approval for midazolam for my son. The paperwork was sitting in front of him, and he would put the approval through that day. It had finally made it to the right desk! To this day, I do not understand why this took so long, or happened this way.

Midazolam worked exactly as we had hoped. Sam’s body would respond within seconds, the episode would dissipate, and his pain and agony would ease.

Due to our great difficulty obtaining midazolam, the palliative care team wanted to ensure we had another option available, and we were offered intranasal fentanyl. Much to our surprise, this was approved almost immediately! There seemed to be no rhyme or reason to medication approvals. Once again, though, there was a hitch. Soon after filling the fentanyl prescription, I heard from Sam’s palliative care nurse practitioner, who had received a call from the “Transmucosal Immediate Release Fentanyl (TIRF) Risk Evaluation and Mitigation Strategy Program (REMS)”. She had been told Sam’s fentanyl could not be refilled: it could be used only for intractable cancer pain, and Sam did not have cancer. We had one sacred dose.

Over the next year, my gut told me we were speeding towards a brick wall. We continued to focus, more than ever before, on comfort for Sam, with the aid of medications and common-sense interventions. Seemingly sinple things: comfortable pillows, soft music, good hygiene, and above all else unconditional love.

Due to a billing issue, we were not allowed the privilege of having hospice care for Sam. We were forced to choose between keeping our home nurses, a part of our lives for 12 years, or transitioning Sam to formal hospice care. We chose to keep our home nurses, knowing full well what this meant. We were now Sam’s hospice providers.

Our connection with pediatric palliative care was now more important than ever, and with their help we were able to provide Sam the end of life he deserved. After a short but severe respiratory illness, Sam peacefully took his last breath. He was resting comfortably in his own bed, with me and my husband at his side. In the end, his body knew exactly what to do, and with a little help from us, did just that. Our job was not to fix but to support, watching carefully as his body gave us cues as to what it needed. In his final week, only the lowest dose of morphine was needed, and that only a handful of times, to ease his discomfort.

We fought hard to ensure Sam experienced humane comfort, particularly at the end of his life. I would do it all again for the peace we retain, knowing he did not suffer.

This piece was originally published in the AMA Section on Hospice and Palliative Medicine Newsletter May 2020 SOHPM Newsletter.pdf

Brenda lives in Stevens Point, Wisconsin. She is wife to Joshua and mother to 3 sons: Samuel, Simon and Solomon. Samuel sustained a massive bilateral stroke in utero, leaving him with cerebral palsy, cortical blindness, intractable seizures, and many other diagnoses. He was medically fragile since birth, non-verbal and non-ambulatory, and needed complete and total care every day of his life. He passed away on September 27th, 2018 at the age of 15. 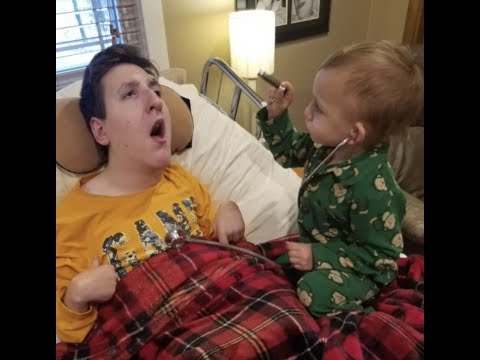