CPN | Another Child? A Mom's Odyssey.
HOME > BLOG > ANOTHER CHILD 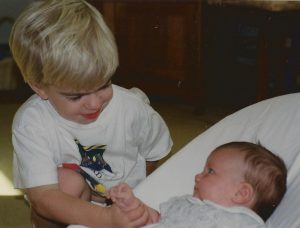 Seven months after my son Benjamin’s diagnosis with a progressively debilitating and eventually terminal disorder, I was pregnant with my third child. Those 7 months and the subsequent first 4 months of pregnancy were ones fraught with anxiety, sadness, and fear.

Looking back some 19 years later, I now realize they also contained determination and hope.

A few weeks after my 15-month-old son’s diagnosis with Sanfilippo Syndrome, and before I became pregnant again, we scheduled an appointment with a medical geneticist. Sanfilippo is an inherited genetic disorder. I remember sitting in the counselor’s office as she perfunctorily explained what the internet had already told me. My husband and I both carried a defective gene and each time we conceived a child we had a 25% chance of having a child with the same condition.  She matter-of-factly presented alternatives – sperm donation or adoption.  We discussed prenatal testing options – back then only amnio was available and even that was only 90-95% accurate.  We shared that we had dreamed of a larger family, hoping that she would offer words that would build our courage and help us find our way of making that dream a truth. Instead, what she offered was both unprofessional and paralyzing advice. It went something like this – we should be happy our oldest child, Noah, was not affected, that Benjamin and the progressive nature of his disorder would require so much of our time and attention that we would have little left to care for Noah much less another child. In essence, she was telling us that it would be irresponsible (I think the word she used was unfair) to bring another child into our family.

That night in bed, I wept tears I did not know I had. I thought I had cried them all out in the days after Ben’s diagnosis. My husband Stuart held me as I sobbed. When words could finally find their way out, I was able to tell him that I was crying for all the children I would never have, for the eggs that would go unused and for the dreams of a big family, a dream that was now broken.  My tears that night came with such ferocity because I felt completely undefined and without hope for the future.

Ironically, I had an appointment with Ben’s pediatrician a few days later.  The words of the geneticist haunted me and I needed to discuss it with someone. So, I told her what the geneticist had said. With Ben sitting on my lap, she reached over and hugged the both of us, and assured me of the ridiculousness of the counselor’s advice.  The child, however it came to our family – by birth or by adoption – would only know our family (warts, bumps, dying sibling and all) and if we were determined in our capacity to love, we should have another child. She added that it was not irresponsible – it would add richness to Ben’s life, and bring companionship to Noah. As she told me about all her other patients with special needs, the other vibrant families, I felt hope returning and a sense of determination growing.

Over the next several months, Stuart and I met with a genetic counselor and engaged an obstetrician who specialized in high-risk pregnancies. We reviewed the profiles of possible sperm donors (cutting one of us out of the genetic loop removed the risk of another child with Sanfilippo). We met with an adoption agency. And Stuart and I had many long conversations about the possibility of another biological child. We agreed that we did not want to bring another affected child into the world and adoption or sperm donation pretty much assured that. A twenty-five percent chance seems small but when you’ve already hit those odds once it looms very very large.

I have always been pro-choice, believing that every woman should have that right. However, I never thought it would be a choice I would need to make.  I was trying to sort out if I could terminate an affected fetus.  I had been pregnant twice before. I knew that by 18-22 weeks, I would be feeling movement inside of me. And for me this was all complicated by guilt – wasn’t choosing not to have another child with Sanfilippo somehow denying the child I so desperately loved and did not want to die?  I’m not sure if Stuart didn’t have that guilt or if he was just more confident in his ability to not have regret, but I knew that going down the biological path was going to require that I make the final decision.

I am not sure what eventually tipped the scales and made me choose to roll the biological dice. Perhaps the unknown but inherent risks in both sperm donation and adoption felt somehow riskier than my 25% chance.  Maybe it was that finding a doctor who felt confident in the results from an amnio done at 14 weeks rather than the standard 18 weeks gave me courage. Or maybe it was simply that I just could not give up on that dream of another pregnancy. In December I was pregnant.

The weeks between the amnio and the results were as one might expect — horrid. The testing was being done in another state, and the doctor would communicate them directly to Stuart. I started to separate myself from my feelings and saw a rising fear in my husband’s eyes. I only really remember three things from that time: when a friend seeing my growing bump asked if I was pregnant and I stumbled as I tried to hide the truth; a song on the radio whose lyrics  captured how I felt (something about a long December and oysters with no pearls); and standing in the dining room as Stuart gave me the results.

That summer our daughter Isabelle (which means In the favor of God) was born. And our pediatrician was right. For her, this is our family.  And she loved Ben fiercely – caring for him like a second mother.  Together, she and Noah will continue to hold his memory and strengthen one another.  For me, I let her birth and the LUCK I felt that she was unaffected fill my heart and complete my family.