I first meant Daniel three years ago when he was in town for the first Disorder: Rare Disease Film Festival. We met to talk about CPN and participation in the second festival. I knew immediately that we were kindred. Like me (and CPN), Daniel recognized the power in story—the ability for it to not just educate but to heal and unite.  It was comforting to be in his presence, to hear about Lucas, his son who was living with Menkes Disease. He shared a story of a family trip in which the stomach flu hit, and in return I shared one about forgetting to pull up Ben’s pants after struggling to change his diaper (Ben was ten at the time) in an airplane bathroom. We laughed and talked about how freeing it was to share openly and be in commune with a fellow rare disease parent. I also discovered that Daniel lived only about 20 minutes from my family’s summer home in upstate NY. The next summer I had the pleasure of meeting Tina, his wife, Lucas and their son Alex. The time gave me a chance to make Lucas smile (and he smiled BIG) – pulling out all the tricks I used with Ben.  My daughter Isabelle spent time with Alex, watching and remembering life with her brother as Alex both lovingly joked with Lucas and felt the sting of others watching us at the beach. For our family, who lost Ben five years prior, the opportunity to spend time with Lucas felt like a homecoming. For Daniel, Tina and Alex, it was a chance to ask questions – the kind that are hard to say aloud.

Daniel and his family returned to our summer home the following summer – this time without Lucas, who had passed away just weeks before. My son Noah and daughter Isabelle spent time at the beach with Alex while Tina, Daniel, my husband Stuart and I talked about the early days of grief. Later, the kids joined us, and our conversation shifted to the sibling dynamic. I was struck by how honest and brave Alex was in his conversation with Noah and Isabelle who are a 10 +years his senior. It took my breath away when Alex quietly but courageously admitted that life without Lucas was incredibly sad but, in some ways, easier. As he said it, his eyes met his parents’ but then quickly turned to Noah who assured him, “The ease is a gift from Lucas. He taught you to understand challenges, to face adversity. The ease will remind you of your strength and love for him.”

The siblings of seriously ill children need time in community with one another. I am very honored that for his first piece as one of CPN’s 2021 Bloggers in Residence, Daniel is sharing his Alex with us.

Welcome Daniel, I know we will learn much from you. 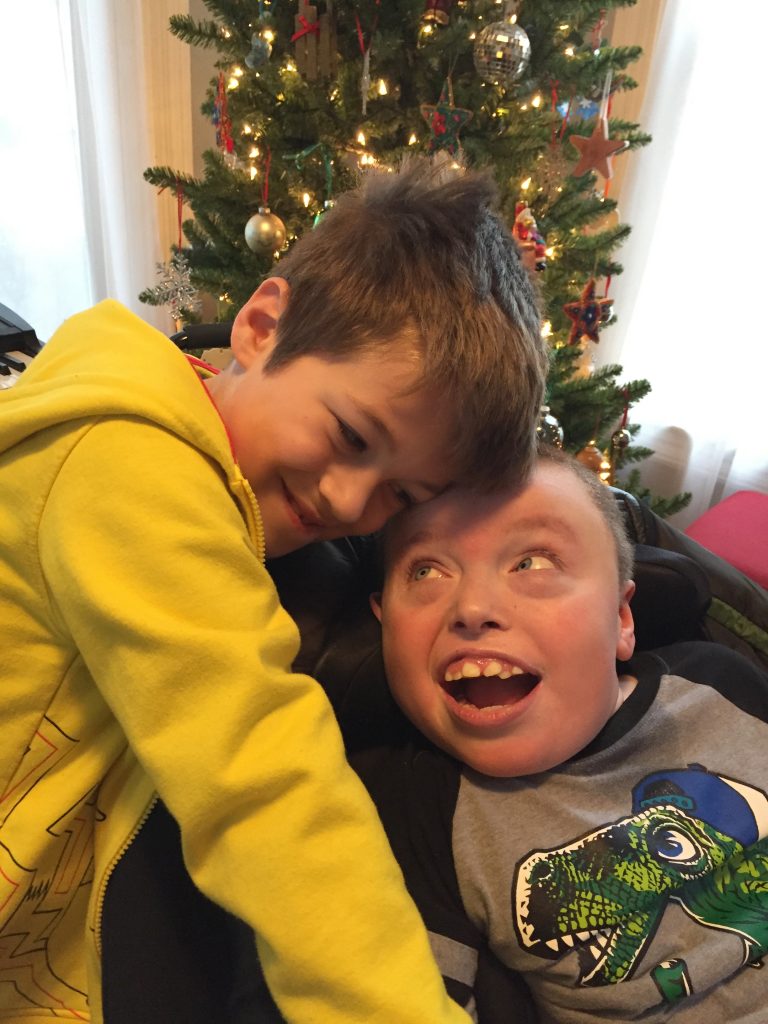 By Daniel DeFabio with Alex DeFabio

Almost exactly 12 years ago we had our first child, Lucas. About 6 months ago we lost him to a rare disease, Menkes Syndrome. My wife and I now tend to think of our life in three distinct stages: before Lucas, with Lucas and after Lucas.  But almost 10 years ago we had our second child, Alex. I try to imagine how different it is for him; he never had a life before or without Lucas until just recently.

I think my wife and I draw some comfort knowing you can have different chapters in your life. We knew a time before finding each other that we were happy. We knew our time as a couple before Lucas and we were happy then. It helps to know we’ve had and will have different people in our lives at different times and we still find happiness in each segment. That’s probably an advantage unavailable to Alex. His whole life has been one uninterrupted segment with Lucas. There has been no other life for him other than as the younger brother to a different sort of big brother. And I worried – would that mean Alex is less able to adapt to the loss of Lucas than we are?

Last month, as we honored what would have been Lucas’s 12th birthday, I asked Alex how things have been different for him, both during when Lucas was with us and since his passing. Here is some of what he had to say.

“I think about how some of my friends don’t get along with their brothers or sisters. They get in fights all the time. I never got in a fight with Lucas. He could never really do anything wrong, except maybe annoy you. But I basically never got annoyed with him.”

He recalled how some strangers and even some of his friends used to see Lucas and think he was a baby.  He remembered, “I have to tell people “No he’s not a baby, he’s special needs.”

I pressed him…did he wish his brother had been different?

“Well, honestly even though it hasn’t even been a year for me not having Lukey as a brother, I’ve gotta say no. I never lived a life without Lukey. I never had to get used to it. I just have to get used to not living with him.”

It’s a relief when I hear Alex’s attitude that having a brother with greater demands on his parents was just how it was. To his mind it wasn’t egregious or damaging. For nine years I had operated with a persistent low-grade fear he was being neglected a bit or given a short shrift.

I sometimes feel Alex might try to avoid speaking ill of Lucas’ memory, so I pressed him for any things that were harder in his life because of Lucas.

“There weren’t really any rules for Lukey because he couldn’t really break any to begin with.”

I asked him what his favorite thing to do with Lucas was.

“My favorite things to do with Lucas was a game we called “Three Pigs in a Blanket”. Lukey, mom and I would be lying on the couch and pull a blanket up over our heads, it was cozy. Lukey would laugh every time. For me it was like being in a theater to put on a show.”

Alex is in typical health and we had just started to see him age into a new role. At ages 9 and 11 the sibling dynamic was shifting and as Alex grew more capable, we saw hints of him becoming a protective older brother character despite the numbers of years each had lived. As Alex says, “Basically every day I felt like: is he really 11 and I’m 9?”  This spring Alex had just begun to do some of the Lukey care, like venting his g-tube. I asked Alex about this new responsibility

“He (Lucas) loved it. And I didn’t like it. It felt weird for some reason. I had never really taken care of him. I think anything I did he laughed. I don’t think I could do anything without him laughing. He just thought it was funny because I was not supposed to do things.”

And as it turned out this action by Alex was the happy punctuation mark on Lucas’ life. Last June when Lucas was finally able to come home after six days in the hospital and several surgeries, we were at last able to have a family night together.  Because of Covid19 concerns, Alex and my wife had avoided any visits to the hospital and hadn’t seen Lucas for six days. These reunions could go either way for us. Often Lucas was just delighted to see those he’s been missing. But just as likely, this could be the moment Lucas suddenly realizes he should have been seeing those people before now. He would be like “Wait minute, where have you been for so long?” and then he’d cry or fuss.

But on this night Lucas was probably just too worn out from recovery to manage either reaction. We worried a bit not to get any smiles. And then we got one – Alex was venting Lukey’s g-tube. He smiled and we could see he wanted to laugh.  It made a huge difference to us. It felt like he was back. His recent months-long decline had been so gradual we hadn’t even realized Lucas had gone weeks without a smile. His smiles not only light up rooms but really seem to lighten the hearts of anyone around him. We definitely needed a Lucas smile that night. We had no way to know then that was our last moment together as a family with him.  But had we known; it was about as good as we could have wished for. The next morning, he awoke for just a few minutes before passing away.

I worried during the life-with-Lucas-time that perhaps Alex was getting less attention than he needed. I could feel a desire to say, “not now, can’t you see we’re busy dealing with Lukey stuff?” I don’t think I ever let myself vocalize that, but I think he picked up on it and was a very good sport about it. I asked him about this recently and he reluctantly admitted he felt that way “sometimes but not very much.” In his words “I never really felt left out really.” and his life with Lucas “It just kinda felt normal. I never really thought about it. It’s just what we did.”

But I’m sure for Alex, it felt like it was always Lucas’ time and rarely Alex’ time. We tried to work against this tendency. Sometimes we stumbled upon unexpected solutions. For example, after we resigned ourselves to never traveling by plane with Lucas, we realized if we were to ever travel farther than a manageable van ride it would mean splitting up the family. This led to some really precious trips for just Alex and his mom, or just Alex and me. He got undivided attention on an adventure with one of us. They are now among his favorite memories. His mom and I each in turn got to feel a week or a few days of “normal” parenting.  For a little while on those trips life was easier. The practical demands of Lucas’ care were temporarily removed. The emotional demands were, for a moment, able to shift from foreground to background. For two of us.

Like most siblings to a special needs kiddo, Alex is sensitive and compassionate. And so, he was guarded and careful not to offend when he mentioned after Lucas’ death that “It’s mostly sad and bad, but there are some good things.” He went on to talk about how “We can do a lot more. We can all go on a vacation together.” (if only Covid would allow).

I don’t know if it’s unfair to my wife and me to think there is lost time with Alex which we now need to make up for; but fair or not, we are approaching this new chapter as one where Alex gets to be our first priority. 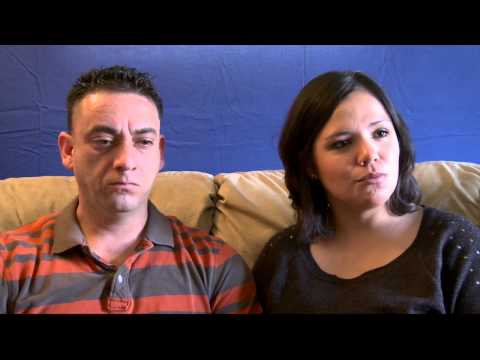 Talking about Diagnosis and Shifts in Baseline