CPN | IN THE ROOM: Grief as a Superpower 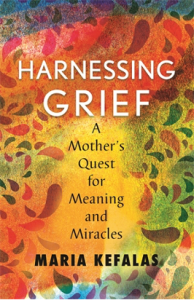 IN THE ROOM: Grief as a Superpower

Watch an archived recording of this event

A Conversation with Maria Kefalas, Author of Harnessing Grief: A Mother’s Quest for Meaning and Miracles

Is grief a superpower?  Join CPN Founder Blyth Lord and author Maria Kefalas as they explore the big wide world of grief in the context of parenting a child living with a serious illness: how it shows up for us; why we are typically afraid of it; how we can adapt to and even, perhaps, befriend it; and how we can harness grief to transform experiences and even create miracles.

Maria Kefalas was a busy working mother and wife who seemed to have it all, a great marriage, three beautiful children, and a rewarding career. Life was perfect. Then, within a span of just three months, her husband, Pat, and then her father and her father-in-law, were each diagnosed with cancer. But it was on July 5th, 2012 that Kefalas’s life took its most remarkable turn when her 2 year old daughter, Calliope, was diagnosed with metachromatic leukodystrophy (MLD), a degenerative, neurological disease with no known treatment. The doctors told Maria and Pat that Cal would not live beyond her 6th birthday.

“When I heard Pat and my dad and my father-in-law had cancer, that had been frightening, overwhelming,” she writes in her new book, Harnessing Grief. “This was something else completely. It felt like I was coming apart at a molecular level. It felt like I was dying too.”

Maria and Pat were head over heels in love with their youngest daughter, whose spirit, dancing eyes, and appetite for life captured the best of each of them. With her diagnosis, their world was shattered. But as Maria spent time listening to and learning from Cal, she developed what she came to think of as “the superpower of grief.” Its energy made her a fearless warrior for her daughter.  And now, during the coronavirus pandemic when so many in America have lost loved ones and the country is struggling with grief on an unprecedented scale, Kefalas, a sociology professor at Saint Joseph’s University, shares how she eventually turned the sadness, rage, and terror that threatened to destroy her into a life-sustaining force.

This superpower of grief also revealed a miracle. Not the conventional sort that fuels the prayers of friends and strangers, but a realization that in order to save themselves, Maria and Pat would need to find a way to save others. And so, with their two older children, they set out to raise money by selling cupcakes so that they, in their son PJ’s words, could “find a cure for Cal’s disease.”

On the one-year anniversary of Cal’s diagnosis, Kefalas discovered the miracle that Cal and the cupcakes would make possible. While scrolling the internet, she stumbled upon an article in Science about a team in Milan that was closing in on an effective gene therapy for MLD. Too late to help Cal, this news would be the start of an unexpected journey that would introduce the family to world-famous scientists, brilliant doctors, biotech CEOs, a Hall of Fame NFL quarterback, and a wise nun and would involve selling 50,000 cupcakes.

Cal’s cupcake money would help families from all over the world make the trip to Milan. By 2020, the Calliope Joy Foundation had helped to send thirteen children to the gene therapy trials, granting them a chance at a miracle. “This was bigger than me and Cal and my family,” writes Kefalas. “It was for every child who came before her and every child who would come after her.”

During their remarkable foray into the world of genetic medicine, Pat and Maria would travel to the FDA, the NIH and the halls of Congress in search of a cure that would never save their child. And their lives would become inextricably intertwined with the families of 13 children whose lives would be transformed by the biggest medical breakthrough in a generation. These families would help them see that in order to save themselves, Maria and Pat would need to find a way to save others.

In 2014 –years ahead of schedule –the Calliope Joy Foundation sent Cecilia Price, a beautiful child with an overwhelming resemblance to Cal, to Milan. Kefalas writes, “As I processed the truth of a miracle, the dull, throbbing pain of watching Cal living every day with this disease ends and gets replaced by this sense that nothing else matters, because I have seen something that was supposed to be impossible.”

Harnessing Grief is a powerful reminder that even our tragedies can inspire us to do extraordinary things. A memoir about heartbreak that is also about joy, it is both unsparing and generous. Steeped in love, it is a story about making meaning.

In the book’s epilogue, Kefalas shares that Pat, her husband of twenty-five years, died in April. Cal, now almost eleven years old, amazes her doctors at every turn. “She is comfortable and cherished,” writes Kefalas, “and has taught us all the meaning of life.” 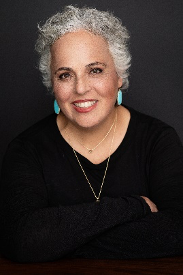 is a professor at Saint Joseph’s University in Philadelphia and the author or coauthor of three books, including Hollowing Out the Middle, Working-Class Heroes, and Promises I Can Keep. Dr. Kefalas is also an advocate, a philanthropist, a blogger, and the cofounder of the Calliope Joy Foundation, which in 2015 helped fund the nation’s first Leukodystrophy Center of Excellence at the Children’s Hospital of Philadelphia and has supported families receiving treatment for MLD. She lives with her three children, Camille, PJ, and Cal, and her dog, Brody, outside Philadelphia.