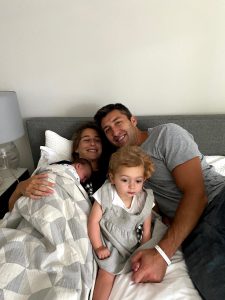 At 5:15 each morning, Michael Sack, age 70, laces up his running shoes outside a rental house in Jamaica Plain. He sets out at a self-described “slow pace,” snaking around Jamaica Pond and the Chestnut Hill Reservoir. “You could call me Reservoir Man,” Michael says.

Michael is training for the Falmouth Road Race, a historic seven mile running race from Woods Hole to Falmouth Heights, though this year the race is virtual. Michael ends his runs at his daughter and son-in-law’s house for a morning visit with his granddaughters, Havi (almost 2 years) and Kaia (1 month).

Michael’s return to running races after 20 years has everything to do with his family—specifically his granddaughter Havi—and for raising money for Courageous Parents Network (CPN).  Last December, 2019, Havi was diagnosed with Infantile Tay-Sachs, a rare fatal genetic disorder that affects approximately 16 children per year in the United States. In the past eight months, Matthew and Myra Goldstein, Havi’s parents, and their extended family have grappled with the profound grief and anger that come with the diagnosis. This summer, Michael and his wife Sandi, along with Havi’s aunts and uncles, Jacob, Erin, Leah and Mike, arrived in Boston to support the family. Their shared experience of grief and love has coalesced into training for the Falmouth Road Race. In honor of Havi, nine members of the extended family and friends are running the virtual seven mile race on August 16th, and they are all raising money for CPN.

Matthew, Havi’s dad, discovered CPN through CPN’s founder Blyth Lord and her husband Charlie, whose daughter Cameron also had Tay-Sachs. (Blyth is also on the Board of the patient advocacy group National Tay-Sachs and Allied Disease – NTSAD.) He says “There really hasn’t been another resource that’s been as comforting and stabilizing and helpful as Blyth and Charlie, and I think CPN is an extension of that.”

For Erin, Jacob and Leah, running for CPN is a meditation on moving through and surviving the grief by connecting with families who have come before. Leah says, “to actually understand there’s a living breathing embodiment of what it means to go on and go on as amazingly and beautifully and truly courageously…It’s inspirational.” Their experience illustrates the healing power and hope of courageous parents and families in connection.

For Matthew, running means spending time with his daughter in his head.  “There hasn’t been a run I’ve been on where Havi isn’t right on top of mind.” It’s what he and his brother-in-law, Jacob, call their running Havi Gear.  “Havi has gotten me up many hills,” Jacob says.

The race is also a source of family hilarity and competitive release. Myra, Havi’s mom, is by her family’s accounts a prolific runner, but just had their second daughter Kaia, so can’t run. She is competing vicariously by making Matthew a “regimented training schedule, including…track workouts and interval training which I haven’t done since college,” Matthew laughs. Erin jokes that she’ll be “focused on the time,” and Michael says that he has already told his children to “stay at the finish line, don’t come back for me! This will be fun,” he says. Kelsey Quick, a close friend of Myra’s from college, remarks that coming together for the race is part of Havi’s power of communicating love. “She can’t really communicate or tell us things, but she’s changed all of our lives and so much of that is in bringing us together and giving perspective.”

Along with the Goldstein/Sack crew, there are  two nurses, two doctors and a generous donor participating in the live run for CPN. “It is meaningful and validating that both family members  and pediatric providers are running for Courageous Parents Network. It’s this combination that together cares for children living with serious illness. It feels like a metaphor for the journey they take,” CPN’s Executive Director, Blyth, reflects.

Among the runners is Shaelyn Waller, a pediatric acute care and palliative care nurse at Franscian Children’s Hospital. Shaelyn says CPN has provided “support and guidance to many of the families that I have worked with as a pediatric patient care and hospice nurse, but also to the providers serving this population… I use their resources and reference guides daily to weekly, supporting families navigating through the journey of having a child with an acute chronic or life limiting illness.”

Kate Davidoff, a palliative care doctor at Massachusetts General Hospital for Children is also running. When asked why she is raising money for CPN, Kate says, “I can think of no better way than to promote awareness and education about the incredible work and mission of CPN than by running on their behalf. In addition, as a native New Englander with family who live full-time on the Cape, the Falmouth Road Race is iconic!”

This year’s iconic race will look a little more home-spun than usual. On August 16th, the ten runners will congregate—mask-clad and socially distanced—in the Lords’ backyard. From there, they will set out separately on the course that includes Heartbreak Hill.

Matthew says he is looking forward to race day for reflecting on how much he loves Havi and what he’s learned from her. And if there is a gust of wind as he hustles up Heartbreak Hill, the type of breeze that Havi turns her face to and “takes big bites of,”  he will think “There you are Hav. Hi Hav. We get her with us all the time.”

In a running sentiment that metaphorically reflects the hope and the strength of all families like Havi’s, Michael Sack says, “in running races, you do it yourself, but you don’t do it without others. I’m looking forward to appreciating how our families have come together around a shared experience in a conspiracy of support for what they’re going through, what we’re all going through.”