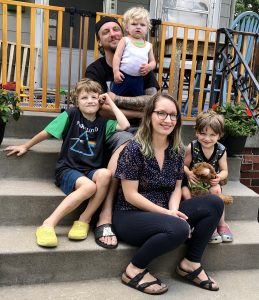 When my youngest of three sons was born eighteen months ago, we knew we were in for a ride. I found out early during my pregnancy that he had a developmental defect called gastroschisis in which the abdominal wall doesn’t close fully during early fetal development, and part of the bowel develops outside of the abdomen. After having had two healthy children, this diagnosis was an enormous shock—I felt so completely unprepared and unaware that something like this was on my horizon. But then, are any of us truly prepared when our journeys as medical parents start? After grieving the loss of what I thought was going to be a healthy pregnancy, I responded by gathering all of the information needed to make the best possible decision for this baby. It turns out, the prognosis for gastroschisis is very good, with most babies living completely healthy, happy, normal lives after the defect is fixed post birth, and the gastrointestinal system is given some time to ramp up and begin working properly. We obtained three medical opinions and chose a hospital that was considered to be our regional center of excellence for abdominal wall defects. At the time of my son’s birth in November 2018, we were expecting him to spend no more than 1-2 months in the NICU, after which he would come home fully healthy- his medical issues part of his history but in no way limiting his future.

When my baby emerged into this world, I only saw him briefly before he was rushed away by a team of neonatologists and NICU nurses, and I wouldn’t see him for almost 24 hours as I recovered from severe blood loss and an emergency surgery post birth. But in that little glimpse I saw of him, he was full of life. He cried just like my other babies did, his body yearning for all of the joy and love and experience that was yet to come. This is something that my husband and I would hold on to, to cling to, as we navigated the next week, in which his condition deteriorated every day, and in which we were ultimately asked, exactly one week after he first entered this world, to make the decision that no parent ever imagines they will have to make. At seven days old, our medical team discovered that most of his bowel had necrotized and could not be saved. In their own shock and despair, they called us into the emergency surgery, showing us the extent of the damage, which we later found out they had never done before. Confused, we asked what they were asking us. “I need to know if your baby should live or die”, the head surgeon told us. I will never forget those words, that situation, the room full of doctors and nurses in surgical gear, my baby so vulnerable, so broken, the despair, the surrealness of the situation. I still can’t believe it all really happened.

After we confirmed with the surgeons that we did, indeed, want them to move forward with the surgery, my son lost most of his small intestine and much of his large intestine, leaving him with a condition called short bowel syndrome. The bowel he was left with is not enough for him to absorb the nutrients he needs to survive and thrive from the food he eats, so he will require IV nutrition via a central line in his chest every day- indefinitely. He spent his first 7.5 months in the PICU before finally coming home on July 4th, 2019- our family’s own private Independence Day.

Today, under the care of a new team, he is thriving and is only connected to his IV nutrition overnight. Although his original doctors told us he’d never be able to eat normally, he loves food and often greets me with the words “more, more” when I get him out of bed in the morning to tell me he’s ready for breakfast. Caring for him continues to be challenging, particularly knowing that the stability we now have could be upset so easily by just one fever or stomach bug. Or COVID. But, he’s truly the happiest child I’ve ever encountered and full of love and an eagerness to experience and savor all that life has to offer.

As parents of children with serious medical conditions or bereaved parents, we are all traveling on journeys that we did not intend to embark on. We didn’t buy tickets for this trip. We didn’t pack anything to make traveling easier. We don’t have a map to show us where we are or where we are headed. When you dream about the kind of parent you will be, you don’t imagine you will have to parent under these conditions. But what choice do you have? The only option you have is to adapt, and to become the best parent you can be under this new set of circumstances. You redefine what it means to be a good parent to your child. And as the circumstances change, you continue to adapt, trying to do the best by your child every step of the way.

For me, being a good parent to my precious boy has meant that I advocate for him, both for his medical needs and for his quality of life, which is a huge priority to us. Without this advocacy, we wouldn’t be where we are today. It has meant that we move internationally in order to get him the best possible care. It’s meant being meticulous about the care of his central line to avoid potentially deadly line infections. It’s meant getting up several times a night to attend to his needs. It’s meant going against my immediate instincts to protect him more than my older two boys because of his medical history to give him space to play, to get dirty, to fall, understanding that these are important for his development and identity outside of his medical condition. It’s meant working to figure out how to give our family as much normalcy as possible despite some major complications. And it has meant laughing- a lot- even when it is easier not to.

It has also meant cutting myself some slack if I am not always able to live up to the standards I set for myself as a parent. And of finally seeing a therapist to work through some of the trauma tucked away neatly in a corner of my subconscious. It has meant working hard to let go of guilt for forgetting something or having a less-than-perfect response to a toddler tantrum. Or of lacking enthusiasm when I peel myself out of bed for the third time at night to check on my son. This isn’t easy, and no one ever said it would be.

Because my son’s journey has so strongly shaped who I am today, it has been a natural next step for me to become involved in research aimed at capturing the perspectives of medical parents and bereaved parents, as well as the experiences of their children in order to inform care for these populations. As a social scientist, one of the research initiatives that is especially close to my heart is the Courageous Parents, Good Parents study, which explores how we as the parents of children with serious health conditions define our parenting role- what it means to us to be good parents to these very special children. With the input of several medical parents, I worked with a team on the development of a survey to help capture parents’ thoughts and reflections on this topic. Data from this survey will help to inform how care teams can best support medical parents in their journeys as “good parents”. Please take the survey now to provide your voice and your perspectives. In addition to helping to further research on this topic, your participation will give you an opportunity to reflect on all of the meaningful, exhausting, beautiful, raw ways in which you are or were a good parent to your loved child. It’s an exercise of self-love, of recognition, and of acceptance that may be especially timely in today’s climate of uncertainty and worry.

When I think about the decision we were asked to make during my son’s emergency surgery, I catch myself holding my breath as if to protect the fragility of his life at that moment. On this, and several occasions we were yet to experience, he was like a tightrope walker, balancing high above the ground, attempting to maintain his balance as storm clouds gathered and gusts of wind blew all around him. As he focused on staying up, tuning out all distractions, some stood below, sure he’d fall off- that it’s too windy up there. But he kept his balance, carefully taking one step in front of the other, and taught us such important lessons about life, love, patience, hope, and compassion in the process. He may be called back on that tightrope once again in the future, as kids with serious medical conditions sometimes are. When he is, we will be down below, cheering for every step he takes and gust of wind he braves, and trusting that there are many more adventures to come on this journey we are taking together. 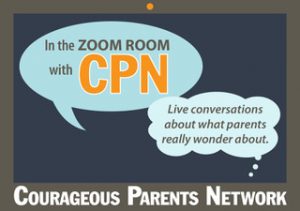 Join Marie and guest providers Drs. Pamela Hinds, Meaghann Weaver, and Lori Wiener for CPN’s Live In the Zoom Room Event “What does being a good parent mean to you?” Wednesday July 22, 3pm EST.

Space is limited. REGISTER at https://zoom.us/webinar/register/WN_eDaRofoFQ2OQnKMdx8Ivww