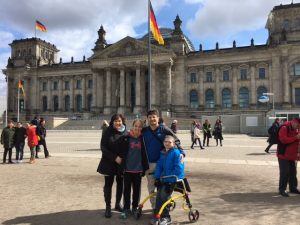 I met my future husband Sherin in a London pub, hours after returning from India, and three months after fleeing the U.S. to avoid attending law school. I was getting ready to return home to Michigan in August 1991, having just arrived back in London after two weeks in India. But after a few dates with Sherin, I decided that I would stay a little longer in the UK, after all. This eventually turned into a year, with even more travels to Germany, the Netherlands, Belgium, Portugal, and France, until I was forced, by my visa limits, to return to the U.S. But I really knew by then that I would not go to law school.

We married in 1994, and I became a psychologist, which I always knew I wanted to be. We lived in London until 2001, until our first daughter Lucy was 3 and when I was pregnant with our second child. It seemed the right time to move closer to family, as our own family was growing. In July 2001, Ben was born in Pontiac, Michigan, in the same hospital my mother was born 57 years prior.

Sherin and I had spent 10 years traveling together (Indonesia, Saudi Arabia, all over Europe), and the last three with Lucy, who we took to India and Egypt. We didn’t expect our lifestyle to change with Baby 2. But Ben started exhibiting signs of what would eventually be named Schwartz-Jampel syndrome, a rare neuromuscular disorder, days after his birth. We did travel throughout the U.S., but our journeys took us to top hospitals in Ann Arbor, Baltimore and Boston, to figure out his diagnosis and to start a life of consultations and complicated medical procedures and surgeries. We managed fun trips whenever possible, carting respiratory and walking equipment and even ordering oxygen for long plane rides as needed, including back to London in 2004 to visit friends. However, a trip to San Francisco in July 2007 almost made us stop traveling forever.

First, one of our bags was lost. While I always tried to distribute durable medical supplies throughout our bags, this time there was one bag that held more stuff, such as tracheostomy suction catheters, than others. When we found out it was this bag that was missing, and which may or may not arrive on the next flight three hours later, I nearly fainted. It did arrive, and we managed to carry out our family vacation. On our return to SFO, however, TSA agents—despite one of the busiest, longest lines I had seen in any airport—made me remove the hip-to-ankle leg braces that Ben was wearing before I could walk with him through the metal detectors. While removing Ben’s shoes and clothing in order to take off these braces, while Charlotte, our youngest child at 20 months old, screamed to be held and hundreds of other travelers watched, I thought “I am never, ever doing this again”.

For four years, we didn’t step foot on a plane. This pained me, but I was steadfast. We purchased a wheelchair accessible van in early 2009, and from then on, if we wanted to travel, we did so by car, to Washing ton D.C., Orlando (with many stops along the way), Montreal, Maine, New Hampshire, Michigan, New York, Ohio and Pennsylvania. We even figured out how to spend a week at Sandbridge Outer Banks, near Virginia Beach, renting a beach wheelchair from a local company who delivered it to the house we were renting. It was hard to find enough fun things for Ben to do at the beach—city travels are more his thing because he loves learning about history and he prefers being inside (glaucoma and certain medications make sunlight pretty difficult for him to bear).  Yet we knew that some of our family’s travels needed to focus on our active, outdoor loving girls.

But after Sherin’s mother died, he felt the pull of Germany, and really wanted to take his now older children to see his mother’s homeland. I adamantly refused. There was no way I was going to suffer further humiliation and discomfort by airport security. He was patient in his attempts to change my mind, and finally, I acquiesced. To my complete delight, I realized that now, in 2011, traveling abroad was an easier, more disability-friendly experience than we had ever experienced in the United States. Ben was treated with respect. Accommodations were made for equipment, medicine was tested without fuss, and we were not rushed along. Lucy and Charlotte were escorted by friendly staff. People smiled. And no bags of equipment were lost, and no equipment was broken. I was finally able satisfy my hunger for travel, with all of my children in tow.

Since then, our family has tried to make one international trip per year, to England, Iceland, Norway, Switzerland, France, Italy, and yes, back to Germany. To some, this may seem decadent, but the cost is nearly the same as that of traveling in the U.S. when you rent a home through AirBnB or VRBO and are then able to eat two meals at “home”. We look for flights many months in advance and compare prices before settling on a deal. And with lower cost but reliable airlines like Norwegian (which we have flown twice), you can fly to Europe for the same as a flight to California (but we all know I’m not flying to California again). We never fly a U.S. based airline when going abroad. They have broken equipment on the way to other states, including during a short 1.5 hour flight to Detroit. We just can’t trust them.

Our experiences in these countries have been almost always welcoming, but Rome was tough. We knew it would be. Luckily Lucy, who was by then 16, was strong enough to help us lift Ben’s wheelchair, and we visited the Vatican museum in the early part of the trip before we were exhausted (the “accessible” Vatican tour means you miss most of the sights. Why travel all that way and not see all that art?). The walk upstairs/walk downstairs route of the Vatican tour was exhausting and must be for thousands of people each year. It’s not a wonder that we never saw one power wheelchair throughout Rome—it would never work, without curb cuts or over those crazy cobblestones—and the manual wheelchairs we did see often suffered hardships (we witnessed two men trying to put a wheel back on a man’s wheelchair).  But Ben, a Latin student, really wanted to go. Ironically, one of the oldest places in Rome, the Coliseum, has an elevator. But that can’t be said for most Roman sights.

Ben was also the force behind our Iceland trip, asking to see the Northern Lights. He requested to go in February one year, before major spine surgery. If you can stand sideways rain, you will love Iceland in February. It was indeed spectacular, and beautifully accessible, and whose body won’t benefit from the geothermal 104F degree silica springs? This was pure heaven for someone with a neuromuscular disorder. For a country of 300,000 people (200K in Reykjavik), Iceland has made universal design the hallmark of their land outside of waterfalls and volcanoes.  Ramps are seamlessly built into town squares and busy streets. If you don’t have an eagle eye for accessibility—which one gets after being with a loved one who uses a mobility device– one would never notice them.

We never thought we could top Iceland’s accessibility, until we visited Oslo and Bergen. It was the first place where we did all of our city travel by foot, boat, train, or bus. Without asking for special treatment, train conductors, captains and bus drivers would spot us in a crowd and escort us to the front of the line, allowing us to board before others. We were in travel heaven.

But in April 2017, we traveled to Berlin, Sherin’s mother’s birthplace. We had visited other parts of Germany on our previous trip in 2011—the Black Forest (not accessible), Freiburg and Konstanz (both gorgeous and fairly accessible). I’ve now termed Berlin the world’s accessible capital. Having rebuilt most of its city over the last 30 years, the people of Berlin have made their entire, extensive S-bahn and U-bahn train system nearly 100% accessible. The trains line up nearly perfectly with the station platform. Elevators are present at all but a handful of stations. And it was hard to find an inaccessible location anywhere. I found myself thinking of now 15 year old Ben’s adulthood. Could this be his prospective home? He’s a German citizen by birth through Sherin, and he speaks German fluently. This country, which committed the most unspeakable acts 75 years ago, might just be my son’s future. 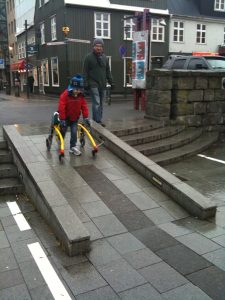 vulnerable citizens. Psychologists often talk about “helping behavior”, which many countries we have visited exhibit through accessible planning and kind citizenship, thereby creating a culture of inclusiveness.  Nothing about traveling with physical and medical challenges is easy, but if you want to travel outside the U.S., you can’t go wrong in Northern Europe. Our girls would love to travel to tropical, adventurous places and they wonder why we can’t plan those kinds of trips. Accessibility is the answer, of course, and it does sadden me that a trip to Costa Rica or Mexico, with its challenging terrains, seems impossible. But Ben, who also studies ancient Greek, would love to visit Athens.  Sherin and I honeymooned in Athens and the Greek Islands. We backpacked through Santorini, Samos and Paros. We can recall that accessibility is not a hallmark of Greek design. Can we make it to Athens with Ben? Whether it is Athens, Costa Rica or Mexico, we should probably try to go, and soon, before we and Ben get older.