Every morning I awoke to the same fear, would today be the day she stops breathing?  We knew losing Elizabeth was going to be awful but we counted on it also being peaceful with the support we had through Hospice. We counted on tenderness and caring, made possible in a safe, controlled environment with the comforts of home and the people who loved her. COVID got in the way. We made sure that tenderness and caring wouldn’t be stopped. 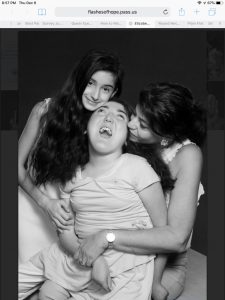 Elizabeth was never her diagnosis: we never wanted that, and she never acted that way. She was strong and resilient, a fighter and a joker. She was a tremendous big sister to Ava, and adored every minute of her attention.  She would place her arm or drop a heavy foot near her and tell her how much she loved her in her own language.  She would respond to her father John’s presence with eyes wide with anticipation and a sheepish grin before he said a single word. She brought her loud belly laugh everywhere she went—school, her prom, her family. She loved to be included and acknowledged.  She needed complex medical care her entire life: I was always her primary caregiver, hundreds of homecare nurses came and left, and she had been on hospice the last two years; but we weren’t living like she would die. 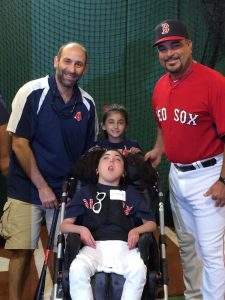 When she required emergency surgery in January, COVID was a curiosity in the international news. We felt the immediate impact as we could no longer source all of her necessary medical supplies, but we  were absorbed in the complications from her surgery, and the decline of her health. One of those complications was liver failure and when she was re-admitted in March, the hospital was unrecognizable. In the emergency room she was tested for COVID and together we remained in an isolation room for several days.  Additional blood work, diagnostic testing or the use of a nebulizer were not permitted until the COVID test came back.

On the first night, she stopped breathing after receiving anti-epileptic medicine. In a zero-pressure room they can’t hear you scream or bang on the thick glass wall. I hit the emergency button, but the door system delayed the entry of the code team. It seemed like forever for them to get in the room to help me while they put on all the protective gear. Elizabeth coded again and they raced her to the ICU, where it took days to get the right lines into her to properly diagnose and treat her symptoms. Her liver was in acute failure. She required blood transfusions, had multiple infections and was being treated for catastrophic decline, when suddenly lab work became infrequent.  She was doing poorly and yet we were hearing ‘we have to be really careful. We have to conserve things.  Even lab send-outs; they’re not allowed because of COVID.’ We lost the ability to measure treatments and began to fly blind.

Conserving during COVID meant the rules for PPE changed daily.  Parents weren’t given masks.  We were free to leave the building, eat in the cafeteria and bring anything into the room. During our 14 day stay, the ICU staff took usual precautions with the addition of a fresh N95 mask issued each day in the lobby. As days passed, rules shifted from staff always donning gowns, gloves and masks to only wearing gloves for IV care, ‘to conserve supplies.’  Boxes of gloves were removed from patient rooms. As COVID cases increased, all non-clinical staff wore PPE at all times. Visitors decreased to 1 parent bedside. We remained free to wander without any protection, and hand sanitizer stations located throughout the hospital were empty.

We wanted to take Elizabeth home but we ran into problems with that. Local companies refused to send anything early, and [the state health plan] wouldn’t pay for overnight delivery. To bring Elizabeth home, I needed sterile gloves for her new central line and PPE for her homecare nurses, but hospice no longer had suppliers with gloves in stock or masks or gowns. All while knowing that being in the hospital for 2 weeks only made it more likely that we would get COVID, or bring it home with us. Her survival was always in question but COVID would be a certain end.

After our long admission in the hospital, away from Ava, unable to switch with my husband, I returned home for another 14 days of isolation with Elizabeth on one side of the bedroom door and John and Ava on the other. I lost several nurses immediately because they couldn’t risk taking care of someone who had been in the hospital, and I didn’t want the risk from a nurse who was also treating someone else.  The nursing shortage in homecare moved to critical and I would care for her alone, sometimes for 72 hours straight. There were never enough supplies, even with friends helping me. I had to clean every surface, every knob and light switch, after every shift of those nurses we had. Elizabeth came home with a central line and the hospital couldn’t give me any supplies, and I had no sterile gloves. No one from any of the agencies, none of our doctors, could help.

As Elizabeth became increasingly ill, it seemed like all of healthcare was making it up as they went along. We didn’t want her to go back to the hospital as we knew we would never leave. We had problems with outpatient testing. We had problems finding food. We had problems getting medicines. We tried to get her medication for comfort from a specialty pharmacy for several days, but the pharmacist wouldn’t release the medicine while they disputed billing liability with hospice. I spent the morning Elizabeth died on the phone pleading for help. The pharmacist told me ‘rules were rules, there are protocols.’ I told her she was showing no remorse or compassion for the pain of a dying child. Elizabeth never got the medicine.

But COVID kept us all home. When the hospice nurse told us weeks or days, and to stop, suctioning, feeding her and giving her meds, it crushed us. I was asking our pediatrician how we were going to talk to Ava when the nurse called us to come to Elizabeth because her breathing was shallow. I turned off the monitor because it no longer mattered, and we just stayed there with her. Ava got very upset because she didn’t know why we weren’t calling 911 to come help. We told her there was nobody who could help, there was nothing to do. But Ava knew that there was something to do and sang Elizabeth her favorite song, “You are my sunshine.” And we held her together. We were together.

The funeral home mercifully gave us time alone before they came into the home to get the body. John lifted her up for the last time from her bed into their quilt and they zipped it up. He never used the ceiling lift. He always picked up his girl. There is comfort in that.

I had always imagined that Elizabeth’s funeral would be a celebration of how wonderful she was and what she meant to so many. The funeral was at the graveside on a cold day in May. My parents were not allowed to leave their Assisted Living to attend. The funeral home wouldn’t allow mention of the cemetery in the obituary for fear that people would show up.

But people did show up. More than 125 people, all wearing masks, including members of Elizabeth’s T-ball team, her doctors, and teachers. Ava’s friends were there to support her.  We settled for the best flowers we could find in a pandemic, 2 days after Mother’s Day. They couldn’t hear what we said, they couldn’t hear the priest, the eulogy.  They stood in the cold, far away with the wind blowing fierce and the birds singing in the trees above Elizabeth’s grave. They were the closeness that the universe afforded us. It means so much to me.

In the months since Elizabeth has died, there have been no meals with friends, no celebrating Elizabeth; only food dropped at the back door. No long cries hugging family and friends.  It’s been 3 months since Elizabeth passed, and we are all still largely alone.  Maybe the world is always indifferent to loss. Maybe a bereaved mother always finds sources for gratitude. Maybe I can tell myself that, despite it all, Elizabeth knew that she was loved for her entire life.

Still, COVID got in the way. Elizabeth left the house without shoes. I will always worry that her feet were cold.

Holly began a campaign to raise awareness for the needs for PPE for in-home healthcare workers. She was interviewed by multiple news outlets. A graduate student who had been organizing with other students to get face masks to healthcare workers and vulnerable populations reached out to help. (The PPEople First Procurement Team delivered 4,000 masks to the state’s Developmental Disabilities Council, which is now still mailing masks out to families for homecare, across the state.) She continues to advocate for homecare nursing rates and safety, as well as actively support local government to apply ADA thoughtfully and consistently removing barriers for those ‘who roll’. 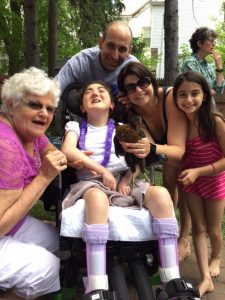