I have always understood that Rev. Eleanor Panasevich was instrumental to Cameron’s story but it hit home especially last week, July 2022, when we got word that Ellie had died. She was 86 years old.

Prior to Cameron’s diagnosis, I hadn’t attended church much since childhood, except for Christmas and Easter. We had had our older daughter Taylor baptized as much for ritual (and making the grandparents happy) as anything else, and we had not since returned to that specific church. I believed in God and that was as much as I could say.

Two days before Thanksgiving 1999, we learned our second child, Cameron, age 5 months, had a fatal aggressive genetic condition and would die in the next few years. I remember waking up the next morning and, lying in bed, inwardly praying to God to give me the strength to do that which I did not believe I could do. At a complete loss, that same day, Charlie and I came up with the idea of baptizing Cameron as a way to affirm her place in the world during her now short life.  Charlie, who was more spiritually curious than I, had started attending several services at the church nearer our condo —  St. Peters Episcopal in Cambridge, MA —  and suggested that we have her baptized there. Rev. Eleanor Panasevich was the Associate Rector at St. Peters and she came to our home to meet with us and learn about our family. I wish I remembered the conversation at this meeting, but I do not. I remember only that she appeared calm and unafraid. She held Cameron and showed great empathy and pastoral, almost maternal, care.

Somehow Charlie and I managed to convey something of our family to Rev. Panasevich so that, a few days later, the Saturday after Thanksgiving, she officiated at Cameron’s emergency baptism with a spiritual love that offered a lifeline to the parents, aunts, uncles, siblings, grandparents and godparents who had so generously and hastily gathered for the event. We were all shell-shocked, especially because Charlie’s nephew, Hayden, had been diagnosed with the same disease only one month prior. A year older than Cameron, he had less time than she. We were 20 people sitting in the pews holding together the extreme fact that the two beautiful babies in our midst would be gone in just a few years.

I don’t know what Ellie first thought when she got the call asking if she’d help us baptize Cameron. I believe it took a lot of courage from her to meet us in that raw devastated state of grief and show us a way forward. In the reading for the baptismal service, Rev. Panasevich read, “God declares, ‘You are my child, the beloved. With you I am well pleased.”  Of course she leaned on Christian teachings, but she knew precisely how to deploy them. I felt grounded by God’s words for my daughter, Beloved and With you I am well pleased. We would build from there. 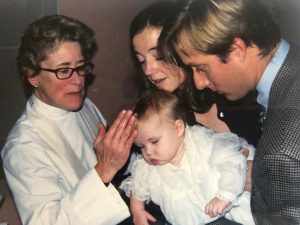 Eighteen months later, Reverend Panasevich officiated at Cameron’s memorial service (Hayden had died 5 months prior). She spoke about Taylor as Cameron’s big sister, the friends and family who had sustained us with their devotion, and Cameron as a baby and as a teacher. She helped Charlie and me show the 150+ people gathered that it was possible to lovingly parent a child knowing she will die soon and, with help from earthly and heavenly allies, to grow that love so big it can encompass everyone and get us all through. In her homily at the memorial service, Ellie referenced the previous baptism and said, “In that service, both Cameron and Hayden, their parents, their families, and all those who love them, experienced God’s grace. There was no one here that day who failed to grasp how deeply loved and cherished Cameron and Hayden are and always will be. God’s love will always envelop Cameron and Hayden.”

In the first few years following, we stayed in touch with Ellie through letters and a few dinners where we’d talk about Cameron, grief, and life after loss. Then our months and years filled with mundane normalcy and we lost touch. I forgive us this, but I do now wish we’d had one more meal with Ellie to thank her again for stepping up so courageously to shepherd our family through two such painful periods. Reading Ellie’s obituary these 23 years after first meeting her, I realize that she was God’s grace in human form. Her spiritual faith was gentle yet strong and held us up and carried us over to where we could catch our breath and live into what lay ahead – first, giving Cameron the best life possible; and then honoring and remembering her ever after.

The evening we learned that Ellie had died, I wondered if her spirit had met up with Cameron’s. Ellie showed up for Cameron. And maybe Cameron showed up for Ellie.

I like to think so. The idea of it makes me smile.

(and what a beautiful smile Ellie had.) 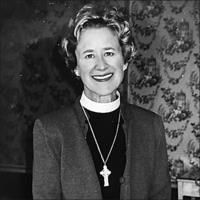 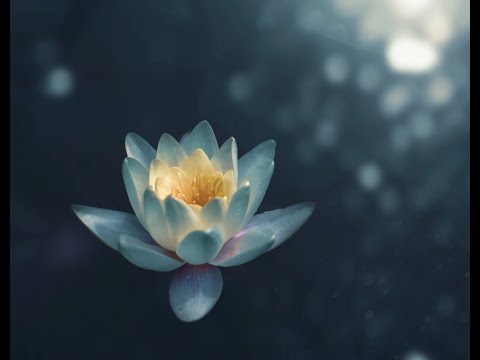